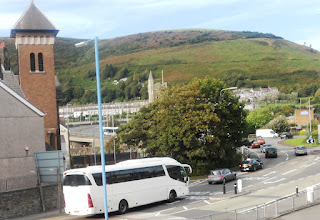 I don’t think that many people stay at Blanco’s Port Talbot for the view. Carpark on both sides and on the perimeter of the town’s by-pass roads. But I just stuck my camera out of the window and Mynydd Dinas in the background makes it a lot better than I’d imagined.
But as I said it’s not the view you want to come here for: it’s the food. I’ve only had two breakfasts and one dinner so far and my 'impressed' monitor just keeps climbing. This morning I had Eggs Benedict, with Welsh bacon.

Little aside: 'Eggs' is mine and Tony’s nickname for the current Pope.)
Yesterday, I had two perfect fried eggs on wholemeal toast. Last night, for dinner, I had the Celtic Pride Welsh Beef fillet steak… ahhhh!!! Opened like butter to the slight pressure of a knife and was cooked with culinary precision to medium rare. I’m in my own little food heaven this week.
I bumped into Rachel Howells at the library this morning. Rachel’s a journalist with Port Talbot Magnet, an online news site that will, fingers crossed, go to paper in the near future. Port Talbot doesn’t have its own newspaper anymore: it lost its Guardian in 2009, a victim of the economic climate and the shift in how news is disseminated now that we have the instantaneousness of the internet. Rachel balances The Magnet with a family and children and her PhD research into the effects of a town having no newspaper: the loss of voice, of identity, of communication. The disappearance of a newspaper has taken on much greater significance than I'd previously thought.
Today she shares with me a piece of news that might not make tabloid headlines but it’s made my blog headline this week: strawberry grapes. What? Do they look like grapes or strawberries? They’re grapes that taste like strawberries. And her friends have been coming from Swansea to Port Talbot to buy them. At The Fruit Box, Riverside Walk, Port Talbot. 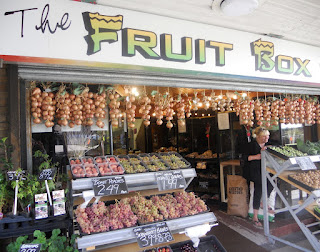 They. Are. Amazing. Sweet little explosions of grape flesh with the distinct taste of strawberries. And they have mango grapes too. I promise. It’s true. I have them here, in my room, with a chunk of Spanish Manchego cheese and a stick of bread from Tesco. They’re like honey but crisp. And to complete the picture I also have a bottle of Cabernet-Shiraz that, to be honest, is letting the whole feast down a little. Not too much though.

Go there. Tomorrow. Buy them. This is unbridled deliciousness we’re talking about. Go. 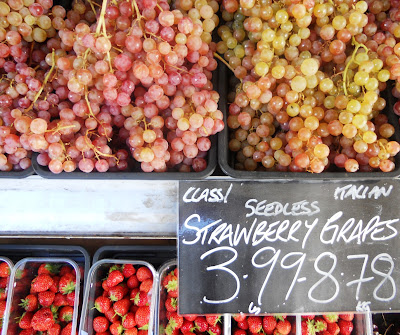 Is it from being kept near the strawberries (as in the photo) that the grapes acquire the taste??!

I know what you mean about the wine letting the feast down - but not by so much that you'd actually exclude it :-)

I saw them the other day but failed to buy any. Looks like my mistake. I will correct that as soon as I can. :-)

Oh I don't know about the strawberry or mango grapes, the idea sounds yummy! I would have them on seeded bagels with cream cheese, but the mucking about with fruit always makes me go hmmmm. But I can imagine a frozen grape pineapple morsel would be delightful.

Breakfast looks lovely, I haven't had eggs Benedict for so long, they were probably an eggs John Paul so long ago it was. Must remedy that this weekend. Have a lovely trip, I am on a foraging trip today, so thick clothes, hooked stick and lots of tupperware at the ready.

I'm getting more demanding about wine as I get older! I want more than just a table wine... I want distinct flavour. But I do find that the wines with more flavour tend to be the higher alcohol content and the older I get the less of them I'm able to drink. It's just a vicious, but mostly enjoyable, circle : )

I know what you mean about the mucking about with fruit, Brenda... but I googled them and they seem to be quite common in Italy...

Apart from a few blackberries on Mynydd Dinas this morning I foraged in a new restaurant tonight - Giovanni's at The Grand Hotel. Beautiful food and service. Anyone who calls me Signora, Bella is pretty good in my books.