Highs and lows: food to die for and food that just dies

on September 22, 2012
Expectations are slippery little suckers. They can send you sliding towards ecstasy or straight into a black hole. I wonder what the statistics are of expectations realised and expectations vaporised?
If you Google ‘having expectations’ a list of pop-psychology responses trickles down the screen:
But some people are more positive or upbeat about them:
Let us be about setting high standards for life, love, creativity, and wisdom. If our expectations in these areas are low, we are not likely to experience wellness. Setting high standards makes every day and every decade worth looking forward to. Greg Anderson
Education is a shared commitment between dedicated teachers, motivated students and enthusiastic parents with high expectations. Bob Beauprez
It is great to be a blonde. With low expectations it's very easy to surprise people. Pamela Anderson
Edward de Bono’s words struck me as a concise summary of shows like X-Factor and Britain’s Got Talent:
Unhappiness is best defined as the difference between our talents and our expectations.
(All quotations courtesy of http://www.brainyquote.com/)
There’s probably a fine line between expectations and illusions. Hopes or anticipation grounded in reality versus impractical and/or self-centred desire. I think, these days, I don’t have high expectations of people I’m in relationship with: family, close friends. But I do have above average expectations of service and good quality when I’m paying for something.
When I went to La Memo, a restaurant in Forge Road, Port Talbot last week and the only expectation I had was to have a good meal in a pleasant environment. This wasn’t a special night out but an early dinner on my own after a day of research. But I reckon La Memo must have the same mind-set as Quentin Tarantino: I want to top expectations. I want to blow you away. 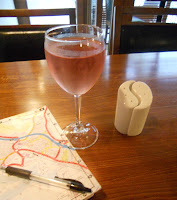 It was one of the most exquisite meals I’ve ever eaten, from the outstanding service to the presentation to the freshly prepared and sensitively balanced flavours of each dish.

It started well with a perfectly chilled glass of Pinot Grigio Blush. I had a tomato and onion salad to start and the dressing had a hint of basil and mint in it: not too much to be overpowering, but enough to charge a simple salad with originality. main course was a King Prawn Risotto flavoured with chilli, garlic and a hint of rosemary, served with a crown of rocket and shaved parmesan. If I ever find myself in an American Prison movie and have to choose my last meal then that will be it. Enjoy. 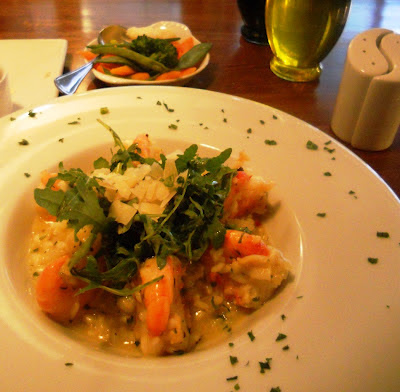 I don’t usually eat dessert but the chef insisted I taste one of his creations: you’ll notice I snaffled up the nose of the passion fruit cheesecake before I remembered to take a photo. 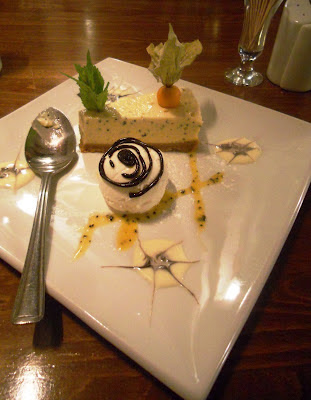 And then there was the coffee which they prepared exactly as I asked: an espresso topped with a splash of hot milk and foam.

I was so impressed that I took my mother there for lunch on Sunday. A two course lunch is priced at £7.95 so surely they couldn’t stick to the same standards as the evening à la carte menu, could they? Oh yes they could.
Given a choice of going out for Sunday lunch or cooking it myself I usually choose the latter: for taste and quality. Not anymore. I am sure that La Memo’s deep dish of moulded herbed potato mash, carrot and swede puree and roast potatoes topped with slices of the tenderest lamb and a cushion of Yorkshire pudding will be at the top of my Sunday Lunch League table for a long, long time.
My husband told me not to write about the ‘Low’ in the title. ‘Perhaps it’s best not to be negative,’ he said. So I’m going to try and make this constructive.
Cwmcerrig Farm has been featured on Welsh TV for the last month or so. The Watkins Family run a farmshop and cafeteria and host an onsite brewery at Gorslas, near Llanelli. They’ve won an array of awards since opening in 2009, Prince Charles visited them earlier this year and they sell Hereford Beef and that was the main purpose of my visit last week: some good quality fillet steaks to take back to Kent.
While we were there we thought we’d have lunch at the cafeteria too. My mother said there were queues of people waiting for tables on the TV programme. Perhaps our expectations were too high, coloured by the programme director's cuts and editing.
I ordered the Faggots and Peas, something I haven’t eaten in Wales for a long time, and they were delicious and wonderfully peppery but the mashed potato served with them was dry looking and full of hard lumps. My dad’s grilled gammon was top class, he said, but the chips were mostly scrag ends of potato, like the bits you find in your chip-shop chip bag after the last fry just before they close. Was I being fussy? It’s a cafeteria, after all. ‘I wouldn’t have passed those potatoes from my kitchen,’ my mother said. She ran the cafeteria in the Port Talbot Skill centre for a number of years in the 1980s. She was right.
The woman who came to take our plates said she’d mention the mashed potatoes to the kitchen. She also said the chips were like that because they were using small new potatoes. Well, chuck out the bitty bits then, rather than fill your diners’ plates with them. There was no offer of a coffee or any real sense of apology. In fact, apart from the young man behind the butchery counter the service was all a bit humourless and dour. Perhaps the strain of celebrity has taken its toll.  Perhaps they were having an off day.
The fillet steaks, wrapped and chilled all the way home the next day along the M4, were delicious. But, to be honest, I’m unlikely to undertake a 50 mile round from my parents’ house trip just to buy their meat.
In the meantime, you can be sure that my Port Talbot trips will be heavily La Memo-ed. Afiyet olsun: bon appetit in Turkish, with thanks to Memet of La Memo for the translation.
Hungry Writing Prompts
Cwmcerring Farm expectations La Memo Port Talbot writing prompt

brenda turner said…
If you are searching for a gastronomic experience, I suggest taking a trip to The Wolfscastle Hotel in Pembrokeshire, I asked for the fine dining menu and was blown away. A starter of creamy prawn and cocconut rissotto, followed by the most wonderful Welsh beef in an orange and port sauce (hate the word jus) and the pudding, ahh a beautifully creamy, just right wobbly passion fruit panaccota. I stayed for the weekend and it was wonderful. It is on my list of, places to eat my last meals on Earth list. I also had the best chiili, garlic prawns in the Castle hotel in Neath and a little Italian in St Mary's Street Cardiff serves the most amazing spaghetti vongole.
08:38

Lynne Rees said…
That all sounds delicious. Wolfscastle is on my list! Thanks!
11:13