on August 22, 2012
I  Y tomatoes. Not in a salad where their seeds and juice run into the leaves and make them soggy but salted on a plate of their own, or chopped and cooked for a few minutes over a high heat in some olive oil and hot spice and served on toast, or stuffed with a savoury mince and topped with grated cheese and flashed under the grill. I like them sliced on top of a cheese and potato pie and sprinkled with oregano. (Does anyone make cheese and potato pie anymore?) I like them picked from the vine and eaten while they're still warm. I like them on a Margherita pizza. I like cherry tomatoes on the vine sprinkled with coarse sea-salt and roasted in the oven until their skins plump up but don't burst. I like them slow roasted. I like sun-dried tomatoes, sun-blush tomatoes, green tomato chutney, home-made salsa. And I think this tomato likes me. 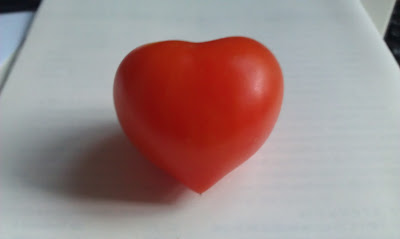 My step-daughter grew this one - in fact she had three perfectly heart-shaped tomatoes from her father-in-law's greenhouse. John died last year and the tomatoes felt like gifts from him, she said.
I don't believe in an afterlife, or any future rewards from a higher being. I don't believe the dead can speak to the living. But I do believe that the connections and relationships we experience while we're alive become a part of who we are.  Acceptance, forgiveness, generosity, tolerance. Resentment, rejection, selfishness, impatience. Perhaps the trick is to learn from them all and become the people we want to be.

moi said…
I find sliced tomatoes don't mess up the salad unless I dress the salad with salt or vinegar based dressings - which also make the lettuce go soggy. We toss huge salads with only olive oil (adding salt and vinagrette, if wanted, on the portion served and about to be et) and leftovers are still crisp and sans sog after a day or so..
13:39

Brenda Turner said…
I hope you add just a wee pinch of sugar to the pan when frying tomatoes, it makes them caramelise beautifully.
10:43