Come into the parlour

on July 28, 2012
Port Talbot is a bit like Danny Boyle’s Olympic opening ceremony – things keep popping up! But these are pop-ups that all involve food. Now, wouldn’t that have been something in the Olympic Stadium – an edible stage set? The Olympic Torch one gigantic flaming sambucca? Not very British though.

I wasn’t a huge fan of the Olympics’ opening ceremony. I liked some of the content but I felt the concept was more stage set than big arena spectacle. But I did stop watching before the lighting of the torch and I’ve been assured that was the cherry on the icing on the cake. That’s far more British.

I am in Wales again, this time for a trip around a forest, a trip around the docks and a trip around the mayor’s parlour.  Don’t you love the word ‘parlour’? From the French parler – to speak — and originally used for a room set aside for receiving and speaking to people. So that’s spot on for the Mayor’s room in the Civic Centre. Although the phrase, 'The Mayor's Parlour' makes me think of plumpness: overstuffed chairs and waistcoats stretched over bellies. 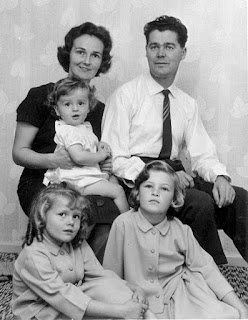 Parlours had their day in both grand and less grand homes. My parents’ house on Sandfields Estate was built with two downstairs rooms: the front room that we called the parlour, and the living room at the back of the house. The parlour was where we had an early family portrait taken. I remember those faint leaves floating up the skin of the wallpaper. The green patterned carpet had just been laid: you can make out a cut-off in the background. It was 1964 and we are a perfect advertisement for the drip-dry family: courtelle, nylon, crimpelene.

One Christmas Day my sister and I sneaked downstairs in the early hours of the morning to find there were no presents in front of the gas fire in the living room.  With our hearts knocking in our chests we started to look around the house and found them in the parlour and, in prize of place, a dolls’ house my dad had made, the roof papered with brick patterned wallpaper. Slowly, and with some difficulty, we carried it into the living room, then went back to shift the rest of the presents too.


‘But we put them in there so you’d have more room and there'd be less mess in here,’ my mother said when she got up and found us in a sea of wrapping paper in the living room. But the parlour wasn’t where we lived, where we ate and watched TV. That room was for unfamiliar things.

The division has gone now. The wall between the front room and the hall was demolished making an open plan space with the staircase in the corner. It has the dining table in it now, an oak and stained glass bookcase from my paternal grandfather’s house, a computer desk for my mother’s laptop and CD player. We eat here when there are more than three of us at home. My great niece and nephew dance in here when they visit. Lulu’s ‘Shout’ is a favourite. We play table-top games here. My mother keeps any flowers she has in this room because it’s cooler than the living room which faces south-west. And it’s always the front-room now, never the parlour. But there’s still a sense of otherness about it, as if it’s been set aside for possibilities, not the business of everyday, ordinary living. 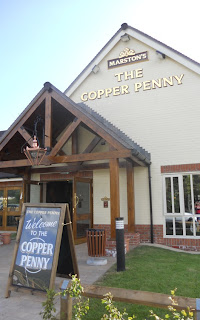 To return to Port Talbot’s pop-ups. A crop of new eateries have sprung into being during the last couple of months:
I’ve ticked the first two off my list and I’ve only been here two days: I highly recommend them both. After making myself go for a two mile run this morning, up and back down the Prom, a cafe latte at Gelato Gatti's was my reward. And I was very happy with the Spring Lamb Stew with Broad Beans and Spring Onions at The Copper Penny late this afternoon. Giovanni’s is booked for next Friday. I’m looking to fit in Trellis one weekday afternoon. Well, a girl has to eat. 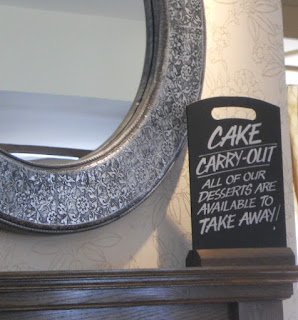 Of course, if you have a parlour, you're very likely to have a mantlepiece. The Copper Penny has a mantlepiece with my kind of ornament on it.