I pick IPic – lay back and don’t think of England

Think about a Filet Slider Trio (filet mignon with caramelized onions, arugula, and crumbled blue cheese on a garlic-buttered and lightly-toasted brioche bun), or some Tuna Wonton Crisps (seared sesame seed crusted tuna on a bed of asian slaw and lightly-fried wonton crisps topped with wasabi mayo and spicy mustard) or the Blackened Mahi Mahi Trio (tender mahi mahi crusted in blackening spice, with jalapeno pepper jelly, and fresh cantaloupe on a lightly-toasted hawaiian roll). If you do want to think of England then order Fish and Chips (old bay seasoned beer-battered cod, served with fries, tartar sauce and malt vinegar).

And watch the movie.

IPic Theaters (there are currently nine in the US) are as far removed from bog-standard cinema going as you can get. The one in Boca Raton has a cocktail bar and restaurant, a whole range of freshly made snacks to buy and take into the movie with you, and 8 theaters. And I’m not kidding about the laying back either. 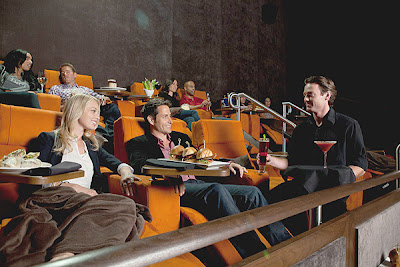 The Premium Plus seats at IPic are fully reclining with a footrest, a pillow and blanket, and a buzzer for waiter service. Oh yes, you get complimentary popcorn too. At $18 a piece, (about £12), if you register (free) as a member, I think that’s a pretty good deal.

My only problem was that I’d been out for lunch and we’d booked in for a late afternoon show so eating wasn’t high on my agenda (for a change) but Tony had the Angus Burger Trio (applewood smoked bacon, crisp shredded romaine lettuce, sliced tomato, sharp cheddar cheese on a garlic-buttered and lightly toasted brioche bun): three mini (that’s mini American size) burgers at $15. I did think about swiping one in the dark but he positioned the plate as far away from me as he could. (You’ll notice that guy in the above shot from IPic’s website isn't quite as proprietorial.) 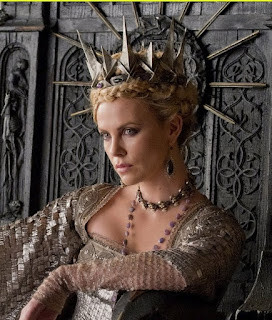 Top marks for the gorgeous Charlize Theron (Ravenna, the wicked queen), Chris Hemsworth (the Huntsman), Sam Spruell (Finn, the queen’s dastardly brother). And for the fairies too, even though they only prance through the movie for a matter of minutes. It’s the kind of CGI technology that can make you believe anything’s possible. Not quite so impressed with Kristen Stewart as Snow White… she didn’t crack the ‘Joan of Arc’ role for me.

And IPic is calling me back. Mainly because I know it’ll be a long time until I experience anything like it again. And because I want to go there feeling really hungry so I can fully indulge myself with the In-Theater menu.

I almost don’t care what I watch.