The lizards are bigger. Okay, it’s been nearly 18 months since we were here, on Hillsboro Beach, FL, but they seem to have been the same size for the two decades we've been coming here so it's a bit of a surprise, this year, to notice they've jumped from the size of an average thumb to the size of a small rat.

They still skitter away from the sun-baked paving stones when they hear you approach but they make a lot more noise in the undergrowth when you pass the hedges that surround each villa. And they don't puff out their little red neck pouches anymore either. I'm not sure what that puffing really meant but I always liked to think it could have been the reptile equivalent of 'Hey, how you doing?' The big ones still make way for you, but rather more slowly which, to me, suggests resentment. It might only be a matter of time before they're as big as the monster we saw a few years back stalking the deck along the Intracoastal Waterway. It must have been four feet from snout to tail-tip with one of those jaggedy spines you normally don't see outside of the British Museum and re-runs of Jurassic Park.

Our friends told us it was probably an escaped pet. Apparently even Komodo Dragons start off cute. This one looked like it could have chewed your foot off.

Holidays involve a period of adjustment: a new time zone, sleeping patterns, a different routine. We're still going to bed quite early and waking up at dawn: 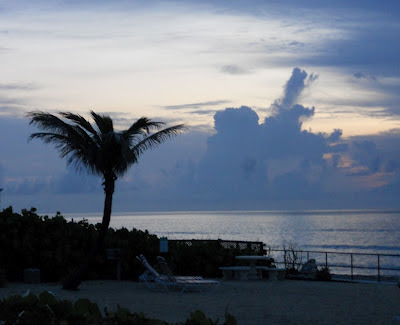 For the third night in a row now I've sat up in bed like a meercat in the early hours of the morning not knowing which appointment I've failed to keep, or which story I miswrote or which MSS I hadn't submitted and my guilty, anxious heart pounds away for a minute until I realise there's nothing to regret or complete.

Foodwise, we've been out for a couple of steaks, and some ahi tuna sushi. Last night we sat on the terrace outside the little villa - you say villa , I say bungalow - with a glass of Grand Marnier over ice topped up with Florida orange juice and wooden skewers threaded with black olives stuffed with cream cheese, marinated artichokes and roasted red peppers:

The most striking thing, but not for the right reasons, I’ve eaten in the last 5 days was a Po’ Boy. I didn’t even know what a Po’ Boy was, which is one of the reasons I chose it at a restaurant facing the ocean at Delray Beach. The menu was heavily in favour of deep fried food and I imagined that if I’d ordered the chicken caesar salad I’d have been asked, ‘Would you you like that deep fried, hun?’

The description of it was pretty good - coconut bread, caramelised onions, tempura battered lobster tail, salad, pickle. I had high hopes, especially when the waitress smiled encouragingly at me and said slowly, more slowly than someone not on drugs should speak, ‘Good choice. The flavour combinations are wonderful.’

I know tempura. At least I thought I knew tempura. Perhaps this was tempura from Japan via Clacton upon Sea. It was… robust. I guess you’d have to be, crossing all those seas to get here. But the lobster tail was sweet and fresh… if a little bland in comparison. It was also, and this’ll come as no surprise, enough for two people. Two people who hadn't eaten for 24 hours.

I did some research for 'po’ boy' when I got back to the villalow or bungilla or bungavilla - for research read 'Wikipedia' - and was relieved that I didn't get the full po' boy on my plate. The name, shortened from 'poor boy', allegedly comes from striking street car workers in New Orleans in 1929. The stories behind some food are more interesting than the contemporary reality, as you'll see if you follow the Wiki link. Although I’m sure natives of New Orleans will be yelping that you can't get a decent po' boy outside the city limits anyway. One day, perhaps.

In the meantime I'm walking up and down the beach each day to make sure that I maintain some connection to the weight I arrived with, and I'm not talking about my luggage. Although there's hardly a chance that a few extra pounds will cause a problem with all this space: 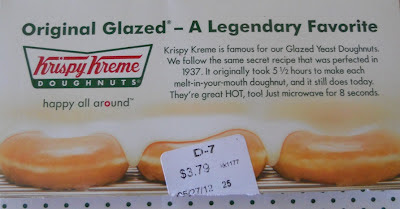 Norman Darlington said…
Myths of America: I would have bet my bottom euro that Americans spelled 'doughnuts' 'donuts', but there we are, the proof of the pudding is on the label (or is that lable...?)
21:11

Lynne Rees said…
Norman... I know, I thought the same. Dunkin' do 'donuts' as do one or two other delicious, cholesterol inducing franchises I've noticed since I've been here. It seems that the Americans are finally learning to spell ; ) Now, let's practice with 'aluminum'...
03:49

Lynne Rees said…
Hi Caroline - well, you have french cheese to gorge on so enjoy : ) The Americans don't do cheese... it all tends to be rubbery faux cheddar stuff or cottage cheese. We even went to a deli to buy french cheese and the Brillat Savarin I bought (a smidgeon for $8!) was nothing like the creamy dreamy delice I used to buy in Antibes.
03:53