on March 09, 2012
I bought my first ‘music centre’ in 1980. Those of you old enough will remember that music centres were large, rectangular constructions incorporating the turntable, a tape deck and radio. Bang & Olufsen was the dream brand – I remember the glossy magazine shots of those streamlined beasts that took up the same amount of space as a small dining room table.
My music centre was the first ‘upright’ one on the market, produced by National Panasonic. It had its own wood effect and glass door cabinet: the music centre sat on top and I kept my LP’s in the cabinet below. I brought it with me to Kent in 1985 and it's been with me ever since. The cabinet has long gone, I don’t have tapes anymore and I hadn’t bothered replacing the batteries for the radio station memory in years but every now and then I’d pull out an LP from its cardboard sleeve, cue the arm of the record deck and listen to Carole King’s 'Tapestry', or Fleetwood Mac’s 'Rumours', or Meatloaf’s 'Bat Out of Hell' on vinyl. 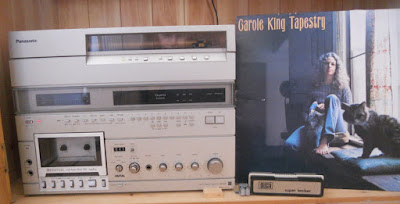 LPs, tapes, record sleeves, deck, arm, vinyl: it’s another language.
I even took it to France when we moved there in 2008, and it came back with me last October but I only got around to setting up the speakers and auxiliary CD player yesterday.
ERR wasn’t a good start on the CD player’s digital read-out: it must have received an irreparable clunk in the move. When Carole King kept repeating the same phrase from ‘You’ve got a friend’, over and over again, I first thought ‘dust on the stylus’ (Note to self: add 'stylus' to Language Library of Nostalgia), or even a scratch on the record. But no, the motorised record arm was sticking an inch or so into play and the only thing that would budge it was a sharp tap which kind of defeated the whole point of playing the record. 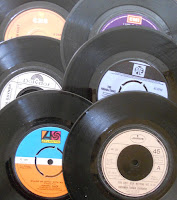 The music centre cost an exorbitant £500 in 1980 – the days before hi-fi (Language Library of Nostalgia??) became a relatively cheap commodity – and I think I’ve had my money’s worth over 32 years. But it still feels a little sad tossing it in the back of the trailer to take to the metal tip. I know I shouldn’t need ‘things’ to remind me of good times, eventful times, life-changing times even, but it’s difficult to snip all threads.
CBS, EMI, Atlantic, Mercury, Pye, Polydor  – there’s even music in the litany of record labels.

And there’s another thing that will be for ever confined to dusty romance-tinged recollection: how sweetly singles fitted into a shoebox. 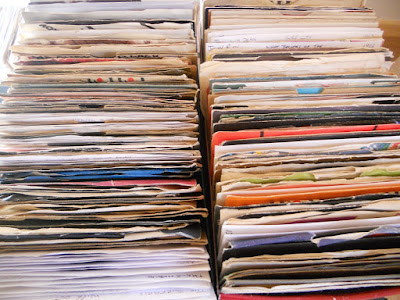 Language Library of Nostalgia
single, noun: a grooved circle of plastic with the power to transport you to a different plane.

Anonymous said…
OH I wish I still had my record collection. All my memories from the very first single I bought with my own money (Benny Hill's "Ernie, The fastest milkman in the West") to all my Heavy Rock Albums by such bands as Uriah Heep, Led Zepplin, and Van der Graph Generator. All lost when my ex-wife gave them to charity before I could retrieve them. Some people can be so mean.:*)
13:08

Huw Rees said…
My first record purchase with a record voucher, under duress from my mother, was Hymns for Little Children, my first independent purchase was My Coo ca Choo by Alvin Stardust, first record on the Magnet record label, in 1973. Slight hiatus i believe then until 1976/7 and PUNK
14:33

Hymns for Little Children! Huw, you should have been more forceful - my first record was Lady Barbara, Peter Noone and Herman's Hermits. Boots in Swansea, by any chance?