What blokes say, dodgy chicken, and a shotgun

on March 16, 2012
As if we didn’t have enough of DIY and house renovation during 4 years in France, Tony has recently changed a couple of cupboards in the kitchen here to two large pan drawers. We had these deep wide drawers in the French kitchen and they remove that ‘kneeling down and clattering around in the back of the cupboard for a saucepan lid’ activity. I’m not saying I couldn’t have lived without them but Tony was up for doing it.
It wasn’t quite as straightforward as you might imagine because our yellow kitchen has been discontinued by B&Q so while he could buy the drawer units it was a case of having to make the drawer fronts out of MDF then matching the colour with matt paint and varnish. 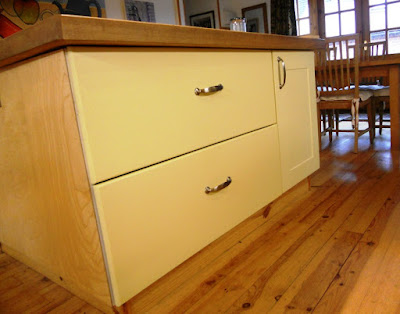 ‘I can’t fit all the same stuff back in,’ I said aloud, more to myself than anything else. The drawers aren’t as deep as the cupboard shelves and I was left with a couple of baking trays and a saucepan after I’d put in as much as I could.
Tony looked over my shoulder. ‘Do you need all that stuff?’ he said.
I looked at him. ‘Only a bloke would say that,’ I said.
‘What do you mean?’ he said.
I rest my case.
I haven’t been doing much cooking. And the one meal I did cook a week ago ended in disaster. The new potatoes cooked to a mush. The carrots boiled dry and burnt. And the free-range corn fed chicken had a strange red and fatty patch of meat in the breast. After looking at it and poking it, to make sure it didn’t move, we decided that the chicken might have been bruised while it was alive. We ate mashed new potatoes with the other half of the chicken breast and green beans, logically aware that it was okay, but not really enjoying it. Not one of my more successful meals and probably down to my total immersion in writing up sections for Real Port Talbot around the prep for dinner. 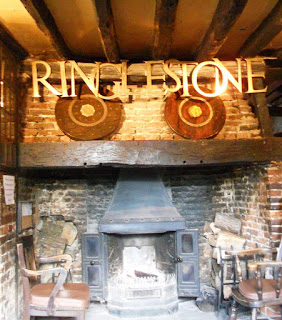 We decided not to risk another lapse of attention last weekend and went out in the car driving aimlessly around the east Kent countryside until Tony saw a sign for Ringlestone.
‘All my friends used to talk about the Ringlestone Inn in the 1960s,’ he said. ‘It was run by a couple of women with a shotgun.’
So, of course, we went.
It’s 16th century. It’s pretty, architecturally full of character. I love the uneven flagstones that track the footsteps of centuries across the bar floor. The wood-burner in the inglenook is gorgeous too. There were two women sitting on either side of it when we arrived and after 10 minutes they got up and swapped chairs so they could toast the other side of their bodies.
Maybe it was the woman who came up to us at the bar just as we were ordering drinks and asked us, with as much charm as a medieval innkeeper whose prize pig had just been poached, to move our car as she was expecting a delivery of calor gas. It was Sunday. There wasn’t a ‘No Parking’ sign next to the fence.
While Tony nipped out to shift it I ordered a bottle of cider for him and a sherry for me. Why the sherry, I’m not quite sure. I think I had an attack of ‘oldy worldy English pub syndrome’. So maybe it was that. I’d have liked something dry – a fino, a pale amontillado – but all they had was Harvey’s Bristol Cream and I was stuck on the sherry road now.
‘Would you like a double?’ the bargirl asked and I declined.
But when she brought the little balloon glass over there was barely a lick of sherry at the bottom.
Blimey,’ I said, laughing, ‘I think I’d better have that double!’
She shuffled over to the bottle again with her head down. The couple next to me waiting to be served coughed and looked around anxiously. I remembered I was in the Home Counties. Spontaneous expressions of emotion are frowned upon.
‘That’ll be £9.90’, the bargirl said.
Holy crap! A cider and a sherry, a tenner?! Have I been in France that long?
Remembering what Tony had said about the shotgun I didn’t complain, though I needn’t have worried. The mother and daughter, Flo (Ma) and Dora Gasking, have long gone. They gave up the pub, according to the two badly framed newspaper articles on the wall, when it was auctioned in the late 1960s but the stories about the shotgun appear to be true. Something that started with ousting a bunch of unruly bikers became a trademark eccentric reputation and people flocked there to be part of it.
We decide not to eat at the Ringlestone where I’m sure the food is fine but eating out isn’t just about that, is it? It’s about the welcome, the service too. And character. And I don’t mean old bricks and beams. The Ringlestone is supposed to be haunted. I hope it’s Ma Gasking. The place needs a bit of spunk.