The path to addiction (and some maths)

I have discovered a piece of France that evaded me while I lived there. But not because I wasn't paying attention. It somehow even managed to evade my French sister-in-law, Manuela, for 38 years. She discovered it when some French language students from the west coast gave it to her as a gift when they stayed at her home in Swansea, South Wales. She gave it to me.
This post should come with a warning of addiction. There is no way back once you start. Forget licking out the bottom of a large bag of Kettle Crisps, forget 'oh, just one more then' when the box of Ferrero Rocher comes around for the 8th time. Whatever your guilty pleasure, it will fade into insignificance if you go any further. Don't come crying to me in a month's time. You have been warned.
But let's do this slowly.


﻿﻿﻿What are the things you were allowed to cook as a child? The first things I remember preparing were the batter for Yorkshire puddings and mint sauce. Late Sunday morning in the kitchen of our council house: the condensation thickening on the window, beans kept green with a dash of bicarbonate of soda, the roast topside or silverside of beef, tied with string, under a dome of tinfoil.
The mint came from our garden and I washed it, dried it and chopped it with the thin blade of a silver handled knife, one of my mother's wedding presents. When the chop was fine enough I added a little bit of caster sugar. Then I chopped it again, added more sugar, before scraping it all into a little glass jug and adding malt vinegar to a level my mother approved of.
My mother once told a family friend from Yorkshire that I made the batter for the Yorkshire pudding. 'But what kind of flour do you use?' he asked me with an air of suspicion and condescension. Are all Yorkshire men this threatened by Welsh ten-year-old amateur Yorkshire pudding batter makers?

You can use plain or self-raising for our silky batter recipe which calls for very little of it - a mere 100 grams.

Do you recognise it? Please don't mistake les moules for mussels. That would lead to all kinds of unpleasantness.
I also helped to make fairy cakes when my mother had a Saturday baking session. When did fairy cakes submit to the American 'cup' cakes? The term must derive from the measuring cups American cooks use. We don't use cups here in the UK. A lot of us don't even use grams. We use real money: ounces. But the drift towards the continent is worth it in this case. Trust me.

These are the moulds (les moules) you'll need to buy.

Yes, you could substitute something else but it won't be the same. You won't get that sweet, gooey and simultaneously crisp bite of french perfection.
Listen to me and this is what you will have in a few hours time: Cannelés Bordelais

And now for the maths. Take 64 cannelés, deduct 8 (for the neighbour), divide by 2 (people) over 16 (hours). How many remain? Your answer may well be different from mine:
Hungry Writing Prompts
Cannelés Bordelais

half a litre of milk, pinch of salt, 2 eggs plus 2 extra yolks, a teaspoon of good vanilla essence, a tablespoon of rum (I used Grand Marnier), 100 grams of flour, 250 grams of caster sugar, 50 grams of butter

Bring the milk to the boil with the vanilla and butter.
While that's happening, mix the flour and sugar, then add all the eggs and mix together.
Add the boiling milk and mix gently but thoroughly to achieve a smooth, silky batter.
Let it cool. Add the rum, stir, and put it in the fridge for at least an hour.

Put a baking tray in the oven and preheat it at its maximum temperature. My gas oven goes to no. 9. 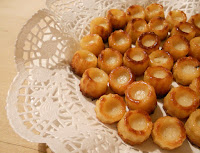 Melt some more butter and brush the insides of the moulds.

Fill the moulds, to about two thirds full, with the chilled batter. Place them on the hot tray and cook for 10 minutes at that high heat.
Lower the thermostat to no.6 (180 electric) and cook for a further 40 minutes.
They should have a lovely brown crust, but don't worry they'll still be soft inside.

It's easier if you take them out of the moulds while they're still warm.

Please post me the contents of your illustration above - my address is: I shall be coming back from France this summer with cannelés moulds!
Your writing is always an inspiration xx

Thanks, Caroline! If you can't wait until the summer, you can order them off Amazon : )