I walked the route between home and Tir Morfa Primary School four times a day for six years. Heading there this morning, my mind automatically re-sets itself to the early 1960s and I start counting my footsteps as I leave my parents’ house. It’s rather satisfying when, at 55 steps, I look up and realise I’m walking past 55 Chrome Avenue.
I’m visiting the school as part of my research for Real Port Talbot. There’s a mural in the Assembly Hall by the Port Talbot born artist, Andrew Vicari and I want to photograph it for the book. 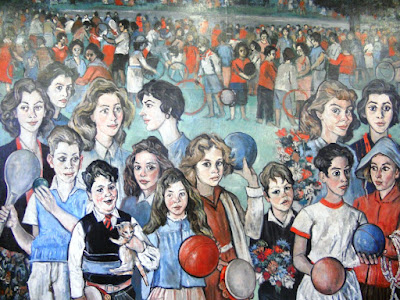 The Tir Morfa mural is a product of its era – the stylised lips and eyes, the strong outlines – and perhaps more of a nostalgia trip for people like me than of any particular value to art history. It takes me back to a time of home knitted jumpers, when the toys we carried didn’t require a power source. The children feel unfamiliar to me but the faces of the women are the remembered mothers of my childhood: Mammy, Aunty Ruth, Aunty Phil, Aunty Beryl. They were the soapsuds and steam of a Monday’s laundry, the warnings of being in trouble when our fathers got home. Letting us stay up late on Friday nights for Bonanza. Women their daughters took for granted until they started to fear losing them. 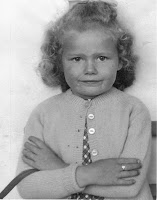 I had my first school photograph taken in the Assembly Hall but it’s the Dining Hall, connecting the Infants and the Juniors, where memory overtakes me, transports me back 45 years.  The long trestle tables are still there and in the room’s emptiness, its mid-morning silence, I can see the table monitors with their long spoons sharing out cottage pie and cake from oblong aluminium tins. Over-heated mashed potato. Those squares of overly sweet baked sponge with jam. I discovered gristle for the first time when I persuaded my mother to let me have school dinners for a term. I was suspicious of the startlingly yellow custard and rice pudding, their thick wrinkly skins.


Some kids didn’t complain although they had a right too when they were required to publicly announce their ‘free dinners’ status as the register was called out at the beginning of each week. And the rest of us stared at them.
Hungry Writing Prompts