Lovely ladies and the invention of the crisp sandwich

I thought that the first photograph I saw on the packet of British Rail’s complimentary crisps was serendipity: these lovely acrobatic ladies on the beach advertising lightly sea salted crisps made from a variety of potato called Lady Rosetta. 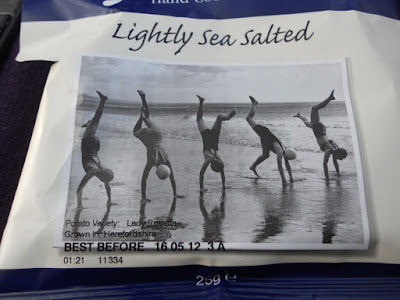 But today, on my train journey back from Wales to London, the girl in the buffet car gave me the Cheese and Chive flavour, the packet decorated with another, no less lovely in their time, I’m sure, group of women: 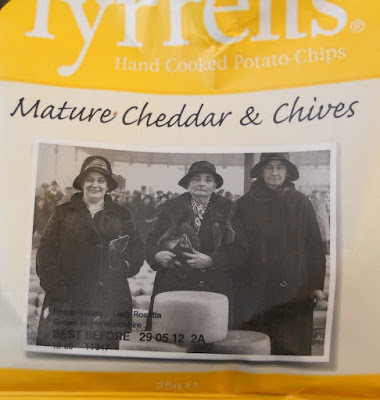 Champions of cheese-making perhaps, or cheese-tasting, or maybe they’re the judges at a WI food market. So it seems that Tyrell’s marrying of potato variety, Lady Rosetta again, and photograph is deliberate.
I have yet to research (or Google, as we say these days!) if they make any other flavours using the  same potato variety and whether those packets also bear vintage photographs of groups of women engaged in an appropriate activity.  Or whether there’s a male equivalent. King Edward? Red Robin?
The first crisps of my childhood were Smith’s. They were plain in a way that kids today could not conceive of: crisp potato slices, nothing else. But there was the excitement of searching in the packet for the little twist of blue paper containing salt so you could season to your own preference. The ‘twist’ became a sachet and then that disappeared too (except for a brief  revival in 1979 of Salt n'Shake) with the introduction of ready-flavoured crisps. Perhaps my early limited crisp experience has resulted in ready salted, or lightly salted, crisps remaining a favourite. Smoky Bacon, Roast Chicken, Prawn Cocktail —I tried them because of the novelty but the flavour never lived up to the promise written on the packet. They were, and maybe still are, heavy on the taste enhancers that found their way into every little gap in your teeth and hunkered there for ages afterwards.
Occasionally I had Cheese & Onion crisps. They were my mother’s favourite but she never ate them when my father was around because he didn’t like the smell.


***
Salt & Vinegar crisps were the star of one particular December afternoon just before Christmas in the mid 1960s. These were the days of milkmen, bread vans, door to door rent collections and insurance men calling round to pick up premiums and my mother always had the weekly payments ready, counted out into plastic bags and tucked into a kitchen drawer.
Aunty Beryl-next-door had already alerted her to the over-excited insurance man who’d been toasting Christmas at a number of houses as he made his way down the street and by the time he arrived at no.73 he was, to be 1960s polite, rather worse for wear, but to use the vernacular of today, completely off his face.
Drunkenness wasn’t a state I was familiar with. I vaguely understood how ‘tipsy’ revealed itself. Or, if it was a man, ‘one pint too many’. But he had attained a state of jollification I had never witnessed in an adult. And he was giving away money – big pre-decimalisation bronze pennies stamped on the tail-side with Britannia. I was enchanted and couldn’t understand why my mother insisted that I give them back.
These were also the days before drinking and driving restrictions and offering a little Christmas drink and a few crisps was de rigeur behaviour but my mother also did her best to ply him with as much black coffee as she could.
‘Let me make you a sandwich too,’ she said.
And he accepted the bread and butter and proceeded to show me how to construct a crisp sandwich. My sandwiches had always come in single varieties from a predetermined list: cheese, corned beef, cucumber, tinned salmon. They were soft and flat. But here were sandwiches breaking the rules, noisy sandwiches, their filling crushed flat in his big hands and equally as noisy in the mouth. I joined in enthusiastically.
I couldn’t wait for him to call again the following week, the funny man who made crisp sandwiches, threw pennies around the room and made me laugh.

‘Do you remember what you did last time?’ I said cheerfully, when he came into the kitchen, receiving the weight of my mother’s glare, his sheepish downward glance, and the raw slap of having said something I shouldn’t have all at the same time. The fun was over.
And so was his job. As far as I can remember someone else took over his round shortly after that. We never saw him again. If he’s still alive I wonder if he remembers that afternoon? If he does, is it with regret, embarrassment or indifference? Would it mean anything to him that his story remains with me, over 45 years later and that I smile every time I remember him?
Hungry Writing Prompts

Email ThisBlogThis!Share to TwitterShare to FacebookShare to Pinterest
Labels: Crisps

The photo on the mature cheddar so aptly illustrates'mature'!
I loved that (slightly greasy) twist of blue around the salt. Didn't they try to re-introduce it a few years back?
What do you think they mean by 'hand cooked' (on the Tyrells label)? It gives me a mental image of someone dropping each slice of potatoe in bubbling oil :)

I don't know where the e came from on the end of potato!

They are probably 'hand-cooked' by giants who can handle those massive pots of hot oil that can cook a 100cwt of crisps in one go : )