Buffets and fiction can change your life

I am reading A.D.Miller’s Snowdrops and now I never ever want to go to Moscow. I know it’s not a Rough Guide; it’s not a Lonely Planet traveller’s insights.  I know it’s fiction, a story created in the author’s imagination, but its descriptions and portrayal of people and everyday life are so convincing. 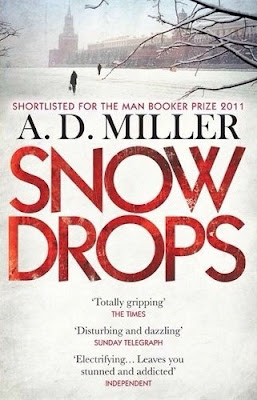 In an interview on the Man Booker website, Miller says: The kinds of crime that the book describes, the pervasive corruption it depicts and the awful vulnerability of anyone without powerful connections are real, as people who have spent time in Moscow will recognise. The details of the Metro, the dacha, the night-life and so on are, I hope, true to life.
No hoping needed. He has absolutely nailed ‘true to life’. But apart from the off-putting crime and corruption, the blood-letting bureaucracy and the cold that freezes the hairs in your nostrils and glues your mobile phone to the palm of your hand, there’s the food:
On the desk was the kind of Russian party spread I always dreaded, as inedible as it was extravagant… all sweaty fish, jellied and unidentifiable bits of animals, Russian chocolate broken into clumps, blinis that were getting cold…

I can empathise with the ‘party spread’. In France, invitations to dinner seemed to be rather stress-inducing formal affairs for their hosts. There was never such a thing as a casual invitation to ‘come and have something to eat with us’. In Antibes it always meant the whole shebang of pre-dinner drinks accompanied with variations on puffy cheese balls, followed by a shift to the dinner table for a dressed salad, a main course, a cheese course, a dessert, their accompanying wines, and then another (heavier) shift back to the salon for digestifs and chocolates. So the popular alternative was to invite people for a ‘party spread’ or, as they called it, un apero dinetoire.

This was a slightly earlier event than dinner that involved champagne or wine and a range of small snacks handed from guest to guest in a way that reminded me of the childhood 'pass the parcel' game, each tray diminishing in servings as it did the rounds.

I could never work out how preparing half a dozen finicky snacks per person was less trouble than plonking a big dish of spaghetti Bolognese in the middle of the table, along with a crusty baguette and a couple of bottles of red wine and saying, Servez-vous! But the french didn't seem open to that kind of British informality. They had their own, a variety of foods you’d never choose to eat together in one sitting: thick cured salmon with a dollop of warm crème fraiche, a little plastic glass of cold carrot soup, saucisson, brioche smeared with duck paté. Think compulsory food tasting and you'd be getting close.

We ordered some vodka and ‘herring in a fur coat’ (marinated fish buried under a sludge of beetroot and mayonnaise).

There’s something unpleasantly visceral about fish and fur in the same phrase. It reminds me of a money dealer I used to work with in Jersey who, if you came in with a killer hangover, would torture you with the image of a chunk of fatty bacon tied to a thick piece of wool being dangled in your mouth.

But back to Snowdrops and its ability to put me off going to Moscow and, if I’m honest, Russia in general. Is it shallow, or naïve, to allow fiction to have this kind of effect on me? Does this clump me with the 50% of British people who, Google tells me, believe Sherlock Holmes was a real person? I’d obviously prefer to think that it doesn’t and that it’s the novel’s emotional intensity, how hypnotised I am by the narrator’s life and experiences, that is contributing to my current negative response to the city.

The Russian women in Snowdrops tend to be young, hard and beautiful. I am convinced by them too. They fit into the landscape, the weather, the economy. And so far (I’m two thirds of the way through the novel) I don’t like any of them either! But I can't recommend this book enough for the insidious way it has taken over my mind, how it keeps me hooked from page to page with its understated dramatic development, and for the quality of its writing too.

The pavement looked like it had been doused in chilled gravy,  says the narrator. The streets smelled of beer and revolution.