on November 04, 2011
I have been carrying this Cumberland sausage around for twenty minutes, the loops of its resealable transparent bag tangled around my fingers like a rosary.  It's jumbo size, curved to an oval and, guessing by the even colour it's been oven baked, and over-baked if I'm honest, its glistening brown skin a little wrinkled. I have clutched it up and down the aisles of Tesco's at Lunsford Park, near my home in Kent, feeling its heat and fearing even to let go of it at the checkout in case it disappeared under a pile of crumpled carrier bags. In the carpark each bag I lift into the trunk is one step closer to it. By the time I slip behind the steering wheel and close the door this sausage has developed mythical status: it is the homecoming sausage. It is all the sausages I haven't eaten during three years in France. It is the sausage to answer my prayer, assuage my cravings for a good British banger.
Of course it does not live up to expectations but some things are good even when they're bad and I forgive the way the skin squeaks when I take my first bite. I forgive the over-seasoning, the enthusiastic bite of black pepper. And I ignore the option of the resealable bag. Nothing will stop me from wolfing the whole thing down in less than three minutes flat. And I do.
That's what I was doing when I should have been posting the latest hungry writer on Wednesday, 2nd November as promised. Sausage lovers among you will understand.

Writing about what I had for lunch, even in Tesco's carpark in a state of sausage deprivation, risks the webspeak accusation of 'cheese-sandwich' blog, a blog that only offers, as columnist Pete Wells says, 'the dear-diary scribblings that don't acknowledge, let alone describe, life outside the author's dorm room.' (Click on the link to enjoy the whole article.)

Since starting the hungry writer a year ago I've tried to make sure that every post is 'about something', that the food, or the anecdote or memory, act as a vehicle for an idea. I think I've been more successful on some occasions than others but having this focus disciplines me, encourages me to strike out some parts of a post that verge off track, or include details to expand the theme I've decided to explore.

Above all, the author should know how to complete the sentence "This blog is about___." Pete Wells says later in the same article. the hungry writer began as a way for me to write about family, about childhood, and about memory through the vehicle of food. In the above link, the beginning, I also said it was, About home, about leaving home and finding ways back.

Last weekend I left France for good and came back to live in the UK. I have been expecting to feel some sense of loss, some sense of longing for the southern coast, the sea-breeze in the garden, the smell of bread from the boulangerie on the corner. At least a touch of sadness for leaving the house we spent so long making beautiful. But all I have felt is contentment. Okay, I have also felt an overwhelming sense of knackeredness as we packed up one house in a 40ft lorry, drove 800 miles and unpacked it all in another house in the course of three days, but the physical aspect of the move aside, my emotional response to the change of environment, of culture and language, has been joyful. 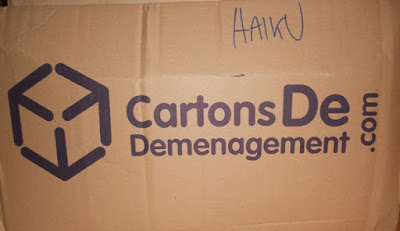 Shortly after we bought the house in Antibes I remember saying to Tony that I felt more at home there than I'd ever felt in rural Kent. I thought I was speaking the truth, but I can't identify with those words now. I don't think I could feel more completely at home than I do right here, now.

So much of what we believe, of what we feel, perhaps even of who we think we are, seems to be dependent on the moment we are living in, the world we are experiencing in that precise and elusive present.

far away
from the sea
today the rain
comes in waves

Terri L. French said…
Wow , I didn't know you moved! How long had you been in France? Is Kent home? It is now. huh. I hope you find your perfect sausage for that banger. Love the haiku! I toast you with a Salty Turtle (actually a cup of tea right now.) ; )

Here is one I wrote about moving.

moving day
another child's handprints
in the driveway
20:44

Waiting, to hear the ring of the bell.
Your voice on the line
A quiet comfort sound.

Not really a Haiku, short and sweet though. For times when we are separate from family, friends or lovers.

Hope you are settling in OK. We will be back in England for Christmas, then back here to start gardening with a vengeance. Sometime next year we may be in the same position. Depends on how things go in the property market.

Lynne said…
Hi Terri - nearly 5 years in total but we renovated the house over a period of three and a half.

I'm going to have to experiment with my own Salty Turtles... I don't think I can wait until I get stateside!

Love your haiku too - our house move has been more wispy, leggy spiders who move at the speed of mist.
10:29

Lynne said…
Hi Jim - ah, phoneboxes... I remember squashing into one with friends to listen to Dial-a-Disc : )

Have a safe trip back for Christmas and all good wishes for your sale next year. I feel lucky for you : )
10:33

Anonymous said…
It's good to hear that you are settling back into life in the UK without missing France too much. I think I'd find it hard after 14 years in France to go back but there are things I miss, like decent customer service and Cumberland sausages!
17:02

teri said…
I just posted to my blog and felt a curious desire to wander over here! Like a sausage your blog called to me - and I have not been here since September! Ah the blogoshere full of pit falls. Anyway you talk of many things BUT I am drawn to how you handle the transition of moving. You seem somewhat surprised, and that is how I will finish. I am surprised as fall heads toward winter I should be moaning. But no I write a blog post about being content. I wonder if I would be as content to move? I would love to come have sausage with you- can you procure another? xo teri
05:27

Lynne said…
Lovely to see you again, Teri. I think that sometimes we surprise ourselves with our resilience and flexibility. But I was very, very organised with all aspects of the move - packing, closing utility accounts, getting the cat's vaccinations up to date! - so perhaps the transition was easier because of that too.

I usually get all moany around about end of Jan/beg of Feb when the greyness of a British winter starts to take effect. If I can manage a holiday around that time - somewhere warm with blue sky - then I can usually keep the moans at bay.