on October 19, 2011
Life doesn't get better than that. Although I have to say that flying isn’t what it used to be. I’ve put up with Easy Jet over the last three years because of cheap flights from Nice and convenient airports (Gatwick and Bristol). Their food is pretty dodgy though, particularly anything hot – the last bacon breakfast sandwich I had looked and tasted like it had been laminated – so I’ve tended to stick to a bottle of water or a tomato juice.
But the price of Easy Jet flights have been increasing. They might look cheaper on the Select Your Flight page but by the time you’ve added luggage and Speedy Boarding (essential if you don’t want to board a plane as part of a re-enaction of The Charge of the Light Brigade) the price starts to lose all attractiveness. The last time I flew to the UK it was cheaper to fly with British Airways than with Sleasy, and that was booking directly on the BA website too.
I remember when a two hour flight guaranteed being served a lunch, or at least a sandwich and a cake. No more. 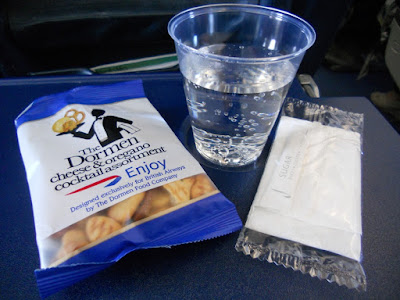 And you’d need to be a forensic scientist to detect the trace of cheese or oregano in that packet. However, it was free. Although on the other side of the curtain, just four rows in front of me in Club World, lunch was definitely being served: the aroma of something hot and savoury filtered through Cattle Class like the animated wisp in a gravy advertisement and we were the ragamuffin kids. Ah, Bisto!
I’ve been teetotal for 23 days. Apparently, according to Wikipedia, the word either derives from a member of the 19th century Preston Temperance Society who had a stammer – ‘nothing but t-total abstinence’ – or it’s a deliberate repetition of the T in total, as in 'Tee-total'. I’m with the stammerer. I’ve felt a little bit like that m-myself now and again during the last three weeks as the urge for a glass of wine has almost overwhelmed me. I’m not on a 7-step programme or anything like that. It’s an exercise in will.
I’ve written haiku every day for 30 days. I’ve swum in the sea every day for 30 days. And it can’t do me any harm to go without any alcohol for 30 days, can it? The Daily Mail suggests otherwise:

What each of these 30 day exercises has done for me is to raise my awareness, and not just my awareness of the thing I’ve chosen to undertake or relinquish. I find myself being more aware of my thoughts and actions in general, more aware of what's going on around me too and that's always good for a writer. Observing and recording are what feeds us.
From The Daily Swim Journal
I count 100 strokes out and 100 strokes back. There are boys on each other's shoulders trying to wrestle one another into the water. A man floating belly down on an airbed. A young couple splashing and diving on one another. In the bay a double masted yacht I'd like to climb aboard. The Alpes Maritimes are covered in mist. It is strange being on my own here. There is a moveable frontier between alone and lonely, a little like the sea and sky today. Sometimes they seem so very far apart, other times they wrap around each other. I'm not sure what I am at the moment. I think that the continuing wave of guests and negotiating the sale of the house (and thinking about the move back to the UK ahead) are combining to make me wobble.
On my next flight out of Heathrow Terminal 5 I’m going to treat myself to a Gordon Ramsay Plane Food box. For £11.95 you can buy a three course picnic of freshly prepared food that beats the pre-prepared, re-heated, over-seasoned trays on any flight. Unless, I imagine, you’re travelling Business or First? But maybe you just get the same food but on proper plates with real cutlery? Or has stainless steel cutlery even been stopped in First Class? After all terrorists have money too.
However, last weekend’s trip back to Nice, from South Wales, meant that I had over 2 hours to spare at the airport so I wandered from restaurant to restaurant checking out the menus. A steak at Ramsay’s was out of the question because I couldn’t bear to eat it without a glass of red wine, so I opted for Wagamama’s and Sparkling Elderflower Cordial to go with the chicken Gyoza dumplings and the chicken Raisukaree: 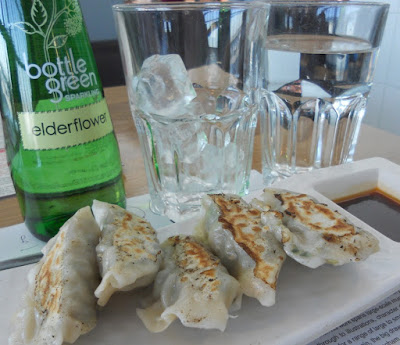 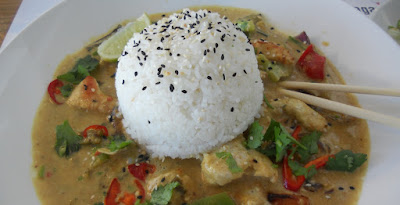 I like Wagamama’s. I like the servers scribbling your order on the paper place-mat. I like it when they say the dishes are freshly prepared so they might not all arrive at your table together. And that no-one hassled me to hurry up despite every table at the restaurant being occupied. And I like their sign.
Delicious food. Great service. And a good book.
I am reading Roger Lewis’s (sorry, Dr Roger Lewis’s – he can be picky about that), What Am I Still Doing Here? He’s from Caerphilly (yes, it matters that he’s Welsh) and is the most opinionated, grumpy, intolerant and funny writer I’ve read in ages. I read Stephen Fry’s Chronicles and kept wanting to slap him for his self-indulgence, even though he kept admitting that he was being self-indulgent. Confessions (I’d even go as far as St Augustine) are often very lightly disguised manifestos of arrogance and self-importance.
Roger Lewis manages to combine self-aggrandisement and self-immolation to a perfect degree. And he has a natty way with language that tickles me pink, as my fellow passengers on BA 0356 from Heathrow to Nice will confirm. However, reading him is probably as close as I want to get. He likes tinned soup. 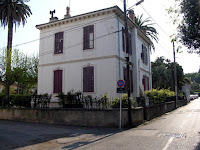 Back in France I am surrounded by cardboard boxes and echoes – literal, as the high-ceilinged rooms are emptied, and figurative. I am vividly aware of what we walked into 4 years ago and what we are leaving for the new owners. The house itself already had the capacity for beauty because of its architecture but we made it happen. I feel prouder now that we are leaving than I have previously felt during the whole of the three years of renovation work. And deservedly so. 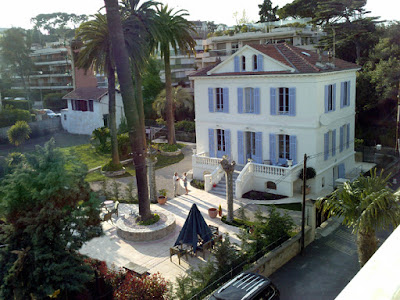 the hungry writer will be taking a break next week as ‘le gros demenagement’ gets underway and we leave Antibes for a 12 hour car journey up the spine of France with the cat. Wish me a stress free time! And I’ll see you in the UK on 2nd November.
Hungry Writing Prompts
British Airways Easy Jet France Gordon Ramsay Plane Food Roger Lewis teetotallism Wagamama's writing prompt