Dreams and transformations, marmalade, and the best view in the world, probably

The bird in my dream is tame. It sits on my hand while I am standing outside my house in Kent. It bathes in the water I pour into a dip in the tarmac right next to my feet. When it presses against my leg it changes into a grey floppy-eared puppy with a thick suede collar around its neck printed with a message: this dog is looking for a home, if it is returned to the address noted it will be destroyed.
Dreams are full of transformations. We walk into one house and find ourselves in a different place entirely. We talk to people we know who don’t look like the people we know. When we dream we’re supposed to be always dreaming about ourselves, each symbol representing some aspect of our character, our psyche.
The dream makes sense on some levels. I am leaving France and going home to our house in Kent. If I am both the bird and the dog then I am relinquishing the air for the earth, flight for firm ground.

Between the age of 8 and 9, in my second year at junior school, I had recurring nightmares about mushrooms and telegraph poles. The mushroom nightmares were more a feeling rather than dreams of real mushrooms but ‘mushroom’ was the only way I could describe them to my mother. Imagine yourself about to tip over into sleep then, at the edge of your perception, something soft and silent begins to expand, pushing against you, filling the space until there is no room for you, until you’re on the verge of disappearing. You cannot breathe.
The telegraph poles nightmare was more straightforward. I am passing them or perhaps they are passing me, but I am counting them. But they get faster and faster until I can’t keep up. My head spins. I feel sick and wake up crying.
My first year in Tir Morfa Juniors' had been in Mrs Bamford’s class. I remember making salt dough jam tarts. I remember her telling us about Winston Churchill’s death, the photo of a fat man with a cigar that she showed us in the newspaper. Mrs Bamford had Mary Poppins hair. Mr Davies was my teacher the following year. He was a thin, worn out looking man who wore a suit the colour of tobacco and a hand-knitted waistcoat. He disapproved of us playing with the Plasticine. If we made mistakes in our exercise books he hurled them from his desk across the room at us. Once, when I was tucking a doll into her pram he told me it didn’t matter how many blankets I put on because it wouldn’t make her any warmer. I remember feeling upset but angry too, angry because, in the way children do, I suspected there was truth in what he was saying and I didn’t want it to be true.
The Times Tables were the focus of Mr Davies’s class which we had to memorise and recite. Like most kids, I found 1 to 6 not too bad, but the trouble started with 7, 8 and then 9.
One 9 is 9
Two 9s are 18
Three 9s are 27
Four 9s are 36
Five 9s are 45
Six 9s are 54
Seven 9s are 63
Eight 9s are 72
Nine 9s are 81
and relief… Ten 9s are 90
Eleven 9s are 99
Twelve 9s are 108
Even today, when I make myself recite it out loud, I can feel the flutter of a small panic in my chest as I pass, Five 9s are 45…
After months of being woken every night by my screams my parents went to the school and complained about Mr Davies’s behaviour in the classroom. My mother remembers the headmaster saying, ‘He suffers with his nerves.’
Whatever the headmaster said or did must have worked. Mr Davies’s demeanour seemed to change overnight and the nightmares stopped shortly afterwards, though I still experienced the mushroom feeling every now and then for years, even into my early twenties, on the point of falling asleep. Maybe it happened on occasions when I was feeling anxious or stressed but it took me a long time to realise there was nothing sinister on the other side of that feeling and that I could allow myself to go with it and ‘disappear’ into sleep.

There are no mushrooms. But there is marmalade, which is transformation.
I bought a net of clementines last week, an early variety called Marisol from Spain, but they were too acidic to eat. Or at least too acidic to enjoy eating. I could have made Nigella’s Clementine Cake but Tony’s on a diet and wouldn’t have thanked me for that, so I decided on the marmalade. 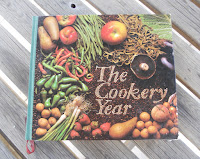 I still have my first ever cookery book, The Cookery Year, originally published by The Reader’s Digest in 1973 and still going strong, and it’s the book I always turn to for basic culinary skills and recipes. I based my marmalade on the Three Fruit recipe but I used only clementines and twice the quantity of water, as opposed to three times. There weren’t any pips in my clementines so I didn’t have to bother with the little muslin bag either and I had about 740 grams of sugar remaining in a bag to the 700 grams of fruit pulp and juice after boiling so I used the lot.
The point at which jam sets for me is always rather hit and miss. I’ve even emptied jars into a pan a day or so later and boiled the whole lot up again to try and make it more jam and less syrup. The most reliable, but not foolproof, test I’ve found is tipping a teaspoonful of hot jam onto a cold saucer, letting it cool, and then running my finger over the surface to see if it wrinkles. And then eating it and trying again later if it doesn’t. 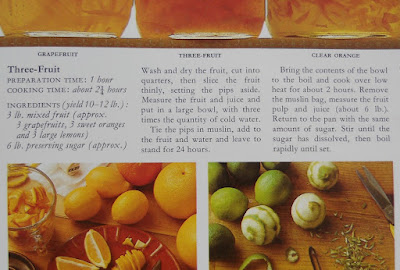 The marmalade is delicious. Sometimes when things change form they change for the better. I’m hoping that will be the case for the hungry writer because this is the 52nd post of a year of weekly posts that I committed to on October 14th 2010.
I’d imagined that at this point, 42,000 words later, I would stop writing the blog and move onto another project. After all I’ve done what I set out to do. But the habit of writing something every week, and sometimes scrabbling desperately towards the self-imposed deadline, has become part of me. I’ve looked forward to the writing and rewriting, sometimes discovering what I have to say in the drafting process, and learning about taking photos. Having a weekly objective has encouraged me to think and reflect and question. All of those things have to be good. And that’s aside from the cooking and the eating.
But perhaps things will change a little. The themes of life and food will remain, of course, but perhaps there’ll be a little more about writing. About how we do it. And reading too. And, I’m sure you’ll be reading a lot more about my home town, Port Talbot in South Wales, as I plan to to be there on a regular basis in the future. And who could blame me with a view like this:
Hungry Writing Prompts
at October 10, 2011

Thank you very much for those 42,000 words. It has been pure pleasure to read them. Whatever more comes will be very welcome too, as an extra bonus :)

So enjoyable to read Lynne. Thank you.

I loved chemistry at school; the idea of blending two compounds together to make a third substance always sounded to me like magic. Our teacher Mr. Obrian was Irish, and educating English kids at the height of ‘the troubles’. Strangely his biggest passion, and mine, was poetry, which we discussed every Thursday during extra classes after school – where we’d make black coffee in a beaker heated by a Bunsen burner; how weird it was learning the Latin name and order in the periodic table of Plutonium at the same time as how ‘to perish before day!’

Thanks, Norman and Wisty, for your support and encouragement, this time and others.

Martin - what a great memory. Thanks for sharing this. He sounds like a teacher worth knowing.

Lynne, I don't know what to say. Let's see... It's been a wonderful trip, and I feel like we're only just leaving the dock. That's a very good sign! I'm so glad you'll be around still. Otherwise I might have my own mushroom dream to contend with.

I enjoy your blog and am glad you are planning to continue it. I find mine a good way of honing my writing skills.

Those 1970s cookery books are great. I still have and use my 1976 series of M&S cookery books - the time before sundried tomatoes and risotto were ever discovered.

Angela, Vanessa - thanks! Look forward to staying in touch with you both via blogworld.

Vanessa - the most exotic thing I remember as a kid was yoghurt! I remember my mother buying one to try it for the first time in the 1960s. And of course Vesta Beef Curry and Rice - my dad's late dinner when he was working nights.