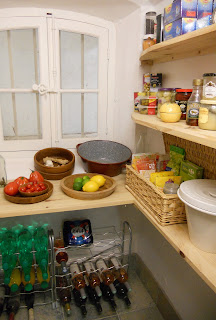 My favourite room in our French house is the pantry or garde-manger. A pantry is something I’ve wanted in a house for a long time. A proper pantry, a little room you can walk into, not just a larder cupboard. The other thing I’d like, one day, is stone windows. You know the ones I mean? Deep window sills with the metal window frames hinged right into the stone walls and the window panes distorted with age? We do have some of that old wavy glass in a few of the windows here but the frames are wooden. But at least I have a pantry.
You see the windows at the back? They don’t have any glass, just fine mosquito mesh to keep out insects and let in the cool air from under the terrace. To be honest, during the summer there’s not a great deal of difference between the temperature in the pantry and the temperature in the kitchen but in autumn, winter and spring you can feel the cool, or even cold, rush towards you when you open the door. 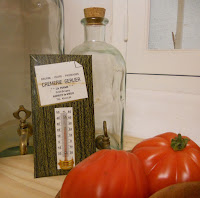 The word ‘pantry’ has its roots in the late Latin, panarius, bread-seller, from panis, bread, and rose up to greet us in English through the old French paneterie, from panetier, baker.
There is something floury and sweet about pantries. Perhaps the sound of the word itself triggers a connection to ‘pastries’. The smell in my granny’s pantry in Dafen, South Wales was like yesterday’s bread, condensed milk.
I only have a vague memory of the one in the house where I was born. It might have had a yellow door. There was an airbrick in the wall for ventilation.
Summer of ‘63
We were the first people at our end of Chrome Avenue to have a fridge. Preparation for it had started weeks before – the brick pantry in the corner of the kitchen was knocked down, new lino laid on the floor. When it was delivered, the neighbours came out to watch its white bulk being trolleyed through the back gate. The next day my mother made ice-lollies from orange squash and I sucked mine until my gums ached.
I was playing in the sandpit in the garden when I told my friend Kathryn about our new fridge. She hit me over the head with a long-handled spade and ran home crying. My mother said Kathryn didn’t like me being different from her. And we were different now. Our butter was hard. We had frozen peas.
new neighbour:
secretly inspecting
her washing-line 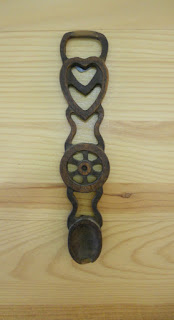 I have a lovespoon on the pantry door. These carved wooden spoons are now a craft tradition in Wales, but they were originally made and presented by young men to convey their romantic intent. I bought this one for Tony shortly after we met in 1985 and it’s travelled with us from house to house, from country to country. The symbols are universal: two interlinking hearts, a wheel.
The pantry door feels like the right place for it. Food I prepare without love (perhaps 'without a genuine interest in what I'm doing’ might be a better description), or prepared impatiently or even resentfully, generally ends up at best mediocre and at worst, inedible.
Here’s something I made with a great deal of interest this week. If you are not a peanut butter fan you might want to look away now. But if apples and peanut butter (stacked into a form reminiscent of a wooden building block toy, called Tom Pedro, that I had as a child ) are your idea of heaven, then this is for you. 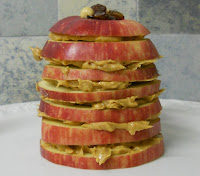 It doesn’t take a lot of working out: apple, peanut butter. But core the apple, of course, before spreading the slices with the peanut butter, then fill the empty chamber in the middle with dried fruit…raisins, sultanas, maybe a scattering of peanuts. I used crunchy peanut butter which is a bit tricky to smooth neatly between the slices of apple, as you can see. You might also want to consider sharing this with someone else because, depending on how many apple slices you make, you could end up with quite a lot of peanut butter. I did. And I didn’t.
Hungry Writing Prompts

Vera said…
I have also longed for a pantry. I won't have an actual pantry here at Labartere, but I will have a pantry 'room' wherein will be kept the freezers, food prep equipment (huge pots, mixers, cutters, etc) drying hams and cheeses (when we get to that stage) etc. Then my kitchen will be more like a room rather than a utility cooking space. Love your pantry, though. Mine will never look as pretty!
06:00

Lynne said…
Hi Vera - I have to confess to a tidy up before I took the photo... although it was long overdue - dried onion skins and dust - and that led me to have a good clear out at the same time. A room full of hams and cheese sounds wonderful : )
15:12

Lynne Rees said…
Hello and welcome. Thank you for saying that : ) I've just re-read this post and suddenly feel homesick for my pantry in the French house that we sold a year ago. I'll have to really look at my kitchen in Kent and appreciate its loveliness in a future post.
22:43