There is no story today. Just this: 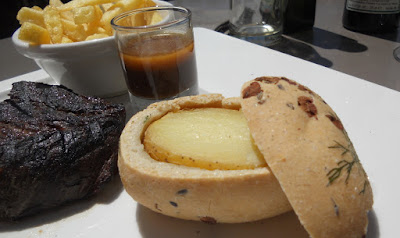 Does food get prettier than this? This is steak and potato Cannes style, courtesy of the Marriott on La Croisette. Okay the steak does what it says on the menu: chargrilled filet mignon. But the potato, the potato! It said ‘salt baked’ and I expected a potato rubbed with sea-salt and baked in the oven not this jewel: a salt


dough crust, its outer skin studded with lavender and rose petals, hugging the potato like a secret.
I like boxes, little containers, pretty things with lids. It doesn’t matter that they’ve lost what they once held. 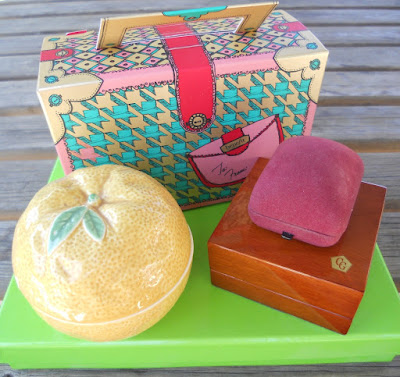 They don’t have to have any financial value for me to want to keep them either: the green box contained a notebook from Hong Kong; the wooden box held a gold heart from my parents, engraved with the welsh word cariad (beloved). There’s the box my engagement and wedding ring came in 26 years ago, even though we only got married in 2007; a cardboard ‘case’ from Benefit that contained a Sultry Eyes eyeshadow palette that I soooo want to believe, a present from a friend who came to stay; and a china orange that was once packed with the most delicious crystallised orange peel, until about 10 minutes after it was opened. 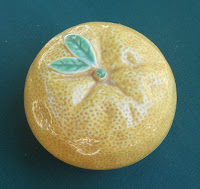 The orange is the only one that isn’t empty now.
It started as a joke when we first rented an apartment in France in 2006. A clementine I’d left on my bedside table for three or four days that Tony drew a face on. Once it was smiling I didn’t want to peel it, so I left it to dry out. I can’t remember exactly how the second one turned up. I might have mislaid the original and mentioned it to Tony. I might have forgotten about another clementine gathering dust with a pile of books. But now there are two; two leathered and weathered little shrunken heads from a time before we bought the house that have been with me through the challenges and fears and delights of the last four years. Two ugly little suckers that still carry their smiles and a slight scent of Christmas orange.
I tell myself I am not superstitious but I won’t throw them out. Or I choose not to throw them out for the time being. Perhaps I will when we move back to the UK, perhaps by then I will feel sure that we are back on firm ground, when we’re surer of what direction life might take. But now I remember that I wrote a poem about them for Tony, (the poets among you will recognise the title and echoes of Williams Carlos Williams) and how could anyone dispose of a muse, however ugly they might be, especially a muse that lives so unobtrusively inside a china orange with a lid?
This is Just to Say 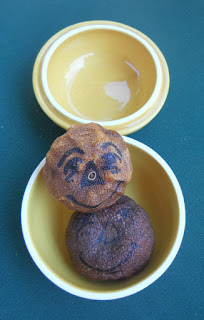 I still have the two clementines
you drew happy faces on, three years ago
when we were living in the small apartment
with the noisy floors

before we bought the big house
with its big garden, before you hurt your hand
before we became tired
and felt far so far away from home.

They have shrunken and puckered.
Their smiles are crooked.
We can forgive each other the bad times.
Their scent is bitter but rich.


I guess there was a story after all. Perhaps there’s always a story when you open a box.

Steak and potatoes... I don't need anything else. Well, perhaps, a bottle of red wine to go with it :) I really like the potato in the salt crust container. What a nice surprise.

Hi Michael - we have to have dinner some time!

oh mmmmmmmmy....why didn't i think of that! Potato heaven! x