Many, many thanks to Tamar Yoseloff for agreeing to guest on the hungry writer this week. Tamar is a US-born, London-based poet whose fourth collection, The City with Horns, which features a sequence of poems based on the life and work of Jackson Pollock, is recently published by Salt.
And apart from being a wonderful poet, Tamar, when we have the chance to get together, is my eating buddy. This is one of many meals we devoured over a long weekend, here in Antibes, last December:
Enjoy her post about cherries. And life.


Still Life with Plate of Cherries

I’m sitting at my desk, eating cherries, each one a little explosion of summer in my mouth. It is a July day in London; cloudy, unsettled. I turned forty-six last week, so I am that much closer to my half-century. As I eat these cherries, I’m reminded of that phrase “life is just a bowl of cherries”. I’ve often wondered about its origin; it is popularly attached to a song of the 1930s, sung by the redoubtable Ethel Merman. It ends like this:
The sweet things in life
To you were just loaned,
So how can you lose
what you've never owned?
Life is just a bowl of cherries,
So live and laugh at it all.
To “cherry-pick” is to select the best, the choicest, the juiciest. The cherry is also a woman’s sex, hence “losing your cherry” is to lose your virginity. Cherries are sexy – to eat them you need to use your whole mouth; your tongue to force the stone from its flesh, your lips to spit it out. But, going back to the song, they are brief, their sweetness on loan for the shortness of their season. Like the shortness of youth, of passion. 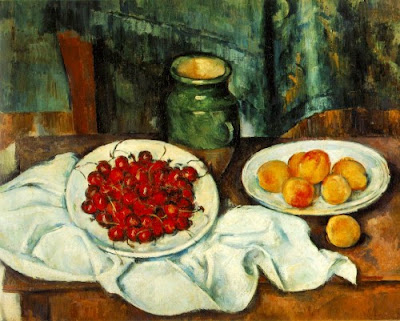 In Cezanne’s painting, ‘Still Life with Plate of Cherries’, their redness hits you like a fire engine, its siren blaring. They are on fire, in a white bowl on a white cloth against a dark wood table which itself is against a darker green background; we could be in a gloomy interior or in the deepness of a forest. On the same table there is a jug – perhaps it contains wine – and another white dish to the right heaped with peaches, but they are eclipsed by the ruby brightness of the cherries. Cezanne gets the symbolism of the cherry, its power to conjure heat and headiness as strong as any nude’s. That’s why he lets them dominate, that’s why the jug and the peaches don’t get a starring role in the title. This painting is about cherries.
Cezanne was forty-six when he started this painting. It would take him two years to finish it. He would live for another nineteen years after that. Of course he would not have been aware of the duration of his life – none of us are – but there is something about the painting that tells us this is the work of a mature artist at the height of his powers, able to control all the subtle modulations of colour and shade and meaning, just as the cherries are at the height of their ripeness. After a cherry reaches full ripeness, it then goes soft, begins to shrivel. Mould grows on its skin, rots its flesh. But Cezanne has captured the cherries in their prime. The darkness is shifted to the background, beyond the table and its feast of fruit and wine. What he is telling us is that we might as well enjoy the sweet things in life while we still can.
Read more of Tamar Yoseloff’s commentaries on art, literature and life at her blog: Invective against Swans.
at July 27, 2011

Love this post, so full of all good things and beautifully crafted words!

If so be you ask me where
They do grow? I answer, there,
Where my Julia's lips do smile;
There's the land, or cherry-isle