on May 04, 2011
One of the reasons why I love our house in Antibes so much is that pretty much everything is within walking distance. The centre of Antibes is a short walk along the seafront and up the broad, plane tree-lined Boulevard Albert 1er. Supermarkets, La Poste, our bank and insurance agent, the Mairie, the Provencal market, bakers and fishmongers and chocolate shops, enough restaurants, bars and cafes that would probably take a year to visit, are all there.
Juan les Pins lies in the opposite direction, a steady climb to the crest of Chemin de Sables from where, 75 years ago, the 19th century palazzo that’s currently being renovated must have had a sweeping and uncluttered view of the bay and the Cap d’Antibes. Now the horizon is mostly filled with high rise apartment blocks that start on land once belonging to the palazzo’s estate and trickle down the hill to La Pinede at the edge of the town, a park full of umbrella pines, clumps of Strelitzia, or Birds of Paradise, and fairground rides for little children.
I now find myself measuring distances in streets and landmarks (the other side of Place de Gaulle, or two streets after Café Kanter) rather than the miles I used when I was living permanently in Kent where even buying a pint of milk involved a car journey.
How long each walk takes depends on how long you’ve been living here. In my first few months it took me ten minutes or less to reach the centre of Antibes. These days it’s likely to be fifteen, or more. I suppose the heat is one reason to slow down. Even in February the sun can sometimes be hot enough to have you wiping perspiration from your forehead and tugging the damp cotton of your t-shirt away from your skin if you set out route-march style. Try it in July or August and you’ll find yourself liquefying after the first 200 yards. But that’s only part of it. The engine that drives life here actually runs at a slower pace.
It might be easy shifting down a gear during a two or three week holiday but getting used to a slower pace every single day is more challenging. Even after three years I can still get irritated when the person serving at the fishmongers or the greengrocers keeps on chatting, at length, with a customer after they’ve made their purchase, regardless of the queue of people waiting. 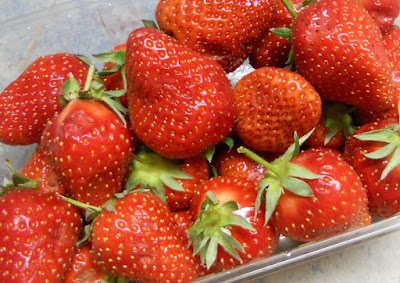 Yesterday, when I went to buy some Carpentras strawberries at the greengrocers, worth every cent of the 4,50 € for their sweetness and deep red hearts, the woman carried on tidying up the punnets of soft fruit, shifting them towards the front of the stall, lining them up neatly. I’ll be with you in a moment, Madame, she eventually said to me, but she didn’t rush, and stood back to admire her handy work before going back behind the stall to ask me, Qu’est-ce que vous voulez? The strawberries that have been sitting in my hands for the last 4 minutes?! 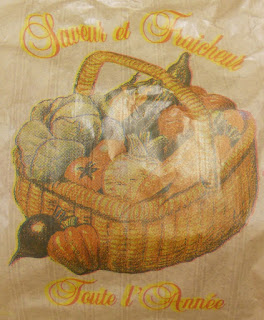 But yesterday I managed to embrace the slowness. While she was wrapping the strawberries I tasted a little slice of melon from the sample plate she'd put out (the first Provencal cantaloupes of the season) and told her I’d take one of those too. She picked up one, two, weighed each one in her palm, tapped them and put them back. She took a third to the scale then changed her mind again, brought it back and exchanged it for another. Ça c’est un bon melon, she said and I had no doubt she’d be right.
I won’t idealise France; it’s not always the case that ‘slow’ is good. I signed a mandate for a new savings account at the bank two weeks ago and the account still hasn’t been opened. But that’s French bureaucracy for you; even the French complain of la paperasse, the bumf of paperwork and length of time that even the smallest administrative task can entail.
But sometimes slow is wonderful. No one has ever chosen a melon for me with such care. And not necessarily because she wanted to please or impress me, but because it was her metier, her trade, and doing it well was what mattered.
Slow Tomatoes 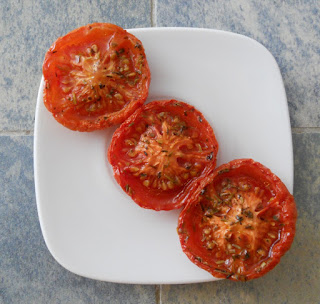 I’ve been preparing this dish with winter tomatoes, adding a sprinkling of sugar to enhance their flavour, but now we’re into spring, and soon to be summer, they don’t need that extra kick of sweetness.
Cut the tomatoes in half horizontally and place cut side up in a baking tray. Drizzle with olive oil and sprinkle with dried herbs – oregano, or Italian, or Herbes de Provence. If you’re using winter or forced tomatoes you might want to add a little salt and sugar too but don’t over season as the flavour does concentrate during the slow cooking.
Now you have a choice. Either put them in the oven at 100° centigrade for 3 to 4 hours or at 50° centigrade over night. This timing is okay for medium to large tomatoes. 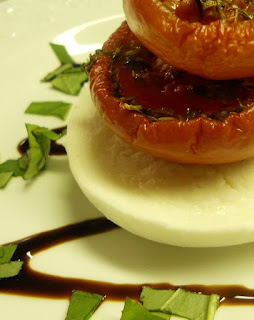 I love them cold with crusty bread, or just snacking on them during the day, but I’ve used them in a tomato and buffalo mozzarella starter too, dressing them with roughly chopped basil and balsamic syrup.
Slow here means flavour. So good.

Anonymous said…
Juan les Pins! We went there on holiday in the 60s and I still remember the scent of the garrigue. As for slowness, it can be desperately irritating in France when you're waiting to be served at a market or shop - not to talk about French bureuacracy.

Lovely tomato recipes - I sometimes drizzle some balsamic vinegar on top, which gives sweetness too.
20:36

Lynne Rees said…
Hi Vanessa - there is something about the name 'Juan les Pins' isn't there? I sometimes say aloud, 'I'm going to the supermarket/post office at Juan les Pins.' just so I can hear it! One of those iconic names... and while it is so incredibly tacky (in a very expensive way too!) there's also something very fun and vivacious about it as well.
09:11