on April 20, 2011
Maybe just saying what it is you can’t remember gets the engine turning over.
Abigail Thomas, Thinking About Memoir
I cannot remember what I had for tea when I came home from school. Breakfast, yes, dinner between half past twelve and half past one, yes, but nothing slides onto the plate of my memory for tea.
I remember the walk home, turning left out of the gates of Tir Morfa Infants and Juniors, the short stretch of Marine Drive before turning left again into the top of Chrome Avenue and how a third of the way along, where the street curved like the heel of an L, I used to measure how long it would take before I could make out our house at the far end.
I remember, after that bend, running with one foot on the kerb, one foot in the gutter, picking up speed and the air rushing past me on the stretch towards home, and misjudging my step on the lip of the kerb and fracturing my ankle. How Ann Hartshorn, who lived next door to me, ran ahead to tell my mother while I sat crying, both feet in the gutter, shocked by how quickly the world could change and fearful of how long I’d have to stay there, in the middle of the street where I didn’t know anyone.
My world was at ‘our end’ of the street, small and safe, defined by my family, the kids who lived around us and their parents who were my Uncles and Aunties. Beyond that it was constructed around prescribed routes and stops.
And we never stopped outside the house at the top end of the street where ‘The Royal Family’ lived, a family the council moved around Sandfields Estate, from street to street, as each house they occupied became uninhabitable: sheets of cardboard stuck against broken window panes, door-frames pulled out and burned for firewood. There was gossip of incest, the father ‘interfering with’ his daughters, and we’d surreptitiously check out the little kids in the front garden as we passed, looking for what might be proof: a cock-eye, a hair lip, teeth spaced like fence posts.
They were rough, we said. Not like the people at ‘our end’ of the street. People who went out to work, who paid their rent and bills and kept their gardens looking nice. Though we must have all had our flaws as well, our secrets, things we kept hidden from view: arguments, affairs, breakdowns, drinking. But I still want to say we were not like them. I don’t believe we are all the same ‘at heart’, or ‘under the skin’, that no one is better than anyone else. Respect has to be better than disrespect. Difference does exist. I’m just not sure where or when it begins. 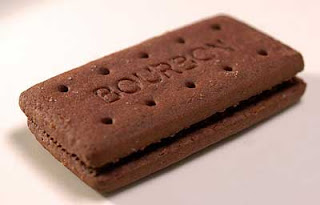 I remember Marie biscuits, Nice biscuits, Jammy Dodgers, Garibaldi, Malted Milk, Custard Creams and, my favourite, Bourbons: chocolate cream sandwiched between two rectangular chocolate biscuits. And sometimes there were sandwiches for tea: cheddar cheese and cucumber, or corned beef, made with thin sliced white bread. Squares or triangles? my mother would ask. Mostly I went for triangles. And sometimes a slice of home-made custard tart made in a deep glass Pyrex dish. My favourite, even when the pastry base had risen up like an arch into the set custard. I don’t know why that happens sometimes and not others, my mother used to say.
…sometimes by stating what you can’t remember you begin to remember.
Make a virtue of the flaw.
Abigail Thomas, Thinking About Memoir

Anonymous said…
Tea is one of the meals I remember best from my childhood. Chocolate digestives were my favourites, although they were a rare treat. I also loved sandwiches made with sandwich spread (which I now loathe - funny how one's tastes change) and with Dairylea cheese triangles (which I still like, although here in France it's Vache qui Rit). I wonder if some of our memories are real memories or things we invent to fill the gap and then transform into real events in our minds.
10:25

the good soup said…
I also find it interesting how much taste changes. My mother used to make this gigantic square of sticky crusted honey cake for us in the afternoons. As a ten year old, I could eat a third of it without thinking. A few years ago I asked her for the recipe and made it myself. It was just the size of a normal cake and too sweet for my aging taste buds.
10:16

Lynne Rees said…
Good to hear from you Vanessa. Sandwich Spread! I'd forgotten about that - yes we had it too but I haven't tasted it for years. I think it had capers, or some kind of chopped green thing in it, didn't it?! It didn't look great, I remember that. I like a triangle of Vache qui Rit too : )

Hi Angela - Re the size of things... I have a memory of sitting in front of a Rum Baba I'd chosen in a Bath tea shop when my mother had advised me otherwise and really wishing I'd listened to her! I remember it as being the size of a side plate... an endless sticky perfumed torture I had to go through!
17:49

Once upon a time, they were my favourite too, until, that is I told my mother they were my favourite (I was about 9 or ten). Ever since then, whenever I visit, out come the Bourbons "I remember that these are your favourites", she says, not remembering that I have told her umpteen times over the past 30 years, that I stopped liking them when I was about 13! She even sent me a box of the bloody things when I lived in Belgium for two years.

To her credit though she still sends me homemade Welsh Cakes...now those, I will never tire of
13:05

Lynne said…
You made me laugh, Gary. I still love Bourbons! Hate Jaffa cakes though! I make welshcakes every March 1st - students and neighbours and even estate agents have been lucky enough to share them with me : )
12:53