on March 16, 2011
I am so pleased and excited that Deborah Lawrenson accepted my offer to write a guest post. I've read her previous novel, The Art of Falling, where she writes exquisitely about family, secrets, food and landscape so I know what delights lay in store for readers of her new novel, The Lantern, due out in the UK and the US later this year. Enjoy this short excerpt from the book and what she has to say about the place that inspired it. And, as you'll see, she makes a mean tomato salad too!
That summer the house and its surroundings became ours, a time reduced in my memory to separate images and impressions: mirabelles, the tart orange plums like incandescent bulbs strung in forest green leaves, a zinc-topped table under a vine canopy; the budding grapes; the basket on the table, a large bowl; tomatoes ribbed and plump as harem cushions; thick sheets and lace secondhand from the market, and expensive new bedcovers that look as old as the rest; lemon sun in the morning pouring through open windows; our scent in the linen sheets.
From The Lantern 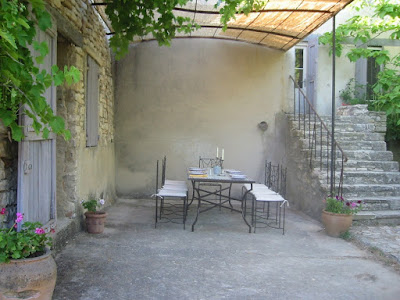 When my husband and I bought an atmospheric but crumbling old hamlet on a hillside in Provence, we arrived with the keys in July to find an overgrown wilderness. A relentless sun had supercharged weeds and wildflowers in the courtyard and the grass on the terraces was thigh-high. Effectively abandoned for a few years, the place was sad and shuttered.
Inside, the smell of mouse was overpowering. Drifts of dry leaves had found the corners of every room. Dead insects crunched under our feet. Scorpions scuttled up walls. We camped on stone floors, took note of the many large structural cracks in the buildings, and hoped for the best.
We knew this valley well. For many years Rob’s parents had owned a house in a village not so far away. I’d first visited and stayed in that house when I was his college girlfriend, way back when. That era ended, and the property was sold, but we always dreamed that one day we’d return and find our own place here.
That first daunting summer, in between sweeping and scrubbing, and meeting builders, I re-read Daphne du Maurier’s Rebecca, and wondered… what if I had come here knowing less about the countryside I was in and the man I was with?
The idea for The Lantern came very quickly. It’s my sixth novel, but even so I don’t think I have ever begun a book more certain of what I wanted to achieve, or with such a strong sense of place. It was all there in front of me, after all. The challenge would be to do it justice: to keep the setting accurate while also conjuring a dreamscape, real and yet not real, shaped by memory and the imagination.
I wanted to evoke the timeless fear of the unknown, beginning with the insidious uncertainties that mark the end of a love affair’s first hectic passion, and real life begins. The idyll of a long Provencal summer that cools into autumn, and brings unexpectedly chill winds, in other words. What begins as a romance becomes a darker story.
It’s also a novel of the senses: as well as vivid visual descriptions of the landscape, I’ve tried to evoke smell and taste and sound and texture, making them integral to the atmosphere until there is an inescapable feeling that there is also a sixth sense in play: an instinctive sense of foreboding that cannot be explained rationally, only felt.
For where we are in the Luberon is a sensuous landscape, with its hilltop villages, lavender fields, clear bright light and rippled blue hills, abundant fruit and vegetables. Scents and colours abound, and even the simplest of meals seems infused with its spirit. Simplicity seems extraordinarily close to hedonism when you find “harem cushion” tomatoes like these in Apt market. 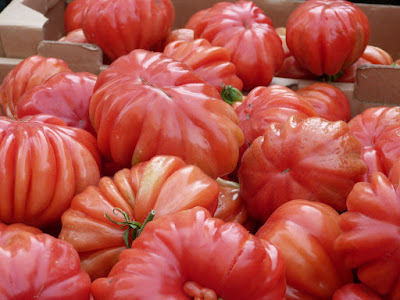 The tomato salad they will make is one of the most delicious and simple dishes known to man: just sliced with onion and a handful of ripped basil, then dressed with olive oil, lemon juice, salt and pepper. It takes five minutes to assemble and then all you need is a baguette, newly baked with a light crust from your favourite boulangerie in the Rue des Marchands, to mop up all the juices. Here is a spring version, using spring onions for a touch of green instead of basil. The perfect lunch, and a taste of summer and outdoor dining to come. 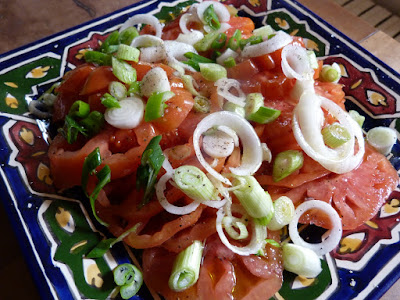 The Lantern will be published in the UK by Orion in July, and in the US by HarperCollins in September.
Website: http://www.deborah-lawrenson.co.uk/
Blog: http://www.deborah-lawrenson.blogspot.com/
Deborah Lawrenson graduated from Cambridge University and worked as a journalist in London. She is the author of six novels, including The Art of Falling, chosen for the prestigious WHSmith Fresh Talent promotion, and Songs of Blue and Gold, inspired by the life of writer-traveller Lawrence Durrell. She is married with a daughter, and lives in Kent and a crumbling hamlet in Provence, France, which is the atmospheric setting for The Lantern.
Deborah Lawrenson salad tomatoes

We make the same tomato salad here and it's the perfect dish for hot summer days. I sometimes add peppers for a bit of variety.
07:39

Kirsten Cliff said…
Loved hearing about your place in France - a dream of mine for another time!

Have just looked online and 'The Art of Falling' and 'Songs of Blue and Gold' are both in my local library so will check them out.

Anonymous said…
Great post by Deborah. What a good idea. I love the harem tomatoes and the simple but delicious salad.

I said I would let you know when my writing group's call for submissions for the Foreign Flavours anthology is out - and now it is. Only thing is you have to be an expat to submit; don't know if you live fulltime in France. Anyway, go to http://www.writersabroad.com to find out more. Feel free to pass on the info.
20:30