on March 01, 2011
This is what makes me happy: good books, good food.
﻿﻿ ﻿﻿Bad food makes me grumpy, as I’ve said elsewhere. And I’ve eaten more unappetising and occasionally lamentable food on residential writing courses than at any other places or times in my life.


On these courses, at least in the UK, evening meal preparation is organised on a rota system. 16 course participants divide neatly into four groups of four for cooking dinner on Tuesday through to Friday. If you’re lucky each group will have at least one person who knows their way around a kitchen, but even then success isn’t guaranteed because cooking for between 18 and 20 people is not the same kind of undertaking as cooking at home for two, or four, or even eight. Even with recipe cards and ingredients supplied there’s a whole world of difference as far as cooking stages and methods, timing and seasoning are concerned (regardless of what the recipe says), not to mention the conflicting opinions of four people who don’t want to add salt, or prefer their rice firm, or believe that butter is bad for you, or don’t even like food that much and see it as fuel rather than feast and bang it all together with the finesse of a farmer preparing mash for pigs.
The food on one course in the 1990s has been seared into my memory for being particularly depressing (penible the French say) due to administrators (poor dabs) struggling to cater for seven omnivores, two pescetarians, four vegetarians, two vegans, two wheat and dairy intolerances and one nut allergy. If there is anything worse than eating variations of flavourless tomato and vegetable based stews for supper every night for a week, it’s having to help prepare them. I wrote nothing of any note that week, devoid as I was of inner comfort.
In my experience, each cooking team will also include a self-confessed, ‘I’m hopeless in the kitchen but will gladly wash up’ older man. I like these men. They tend to be jolly and self-effacing; you can tell them what to do and when to do it. They’re pleased to be directed and don’t take offence, unlike ‘the one’.
Yes, ‘the one’. The majority of writing groups, residential and otherwise, have ‘the one’, the person, and they can be male or female, who’s overly defensive, confrontational and attention-seeking. They create an atmosphere, a palpable tension that sometimes has to be diffused by the tutors, or the group themselves manage to deal with it by bonding so strongly they hold any conflict at bay. I know one administrator/tutor who spent most of a week with ‘the one’, alternately distracting and soothing them in order to keep the rest of the group running smoothly.
But, it doesn’t happen in all groups, and it’s not all the time. Although if you are in a group and there isn’t, as far as you can tell, ‘the one’ then it’s worth considering whether ‘the one’ might be you! 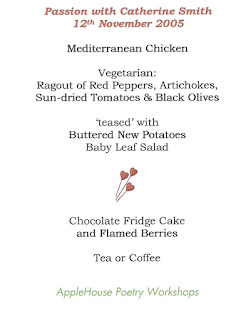 But back to food. Not everything I’ve eaten on writing courses has been disastrous, but for the most part it’s been mediocre. Perhaps that’s inevitable when the people detailed to cook are distracted, unable to give their full attention to the task, unwilling even. After all they’re there to write and every minute of that week is precious. And food prepared without care and love generally appears careless and loveless on a plate.
So when I founded and ran the AppleHouse Poetry School at my home in Kent between 2005 and 2007 I was determined that the food had to contribute to the overall experience. What’s the point of booking an exceptional poet and tutor to run an exceptional workshop or master-class if, at lunch, people are presented with mediocrity, or worse? 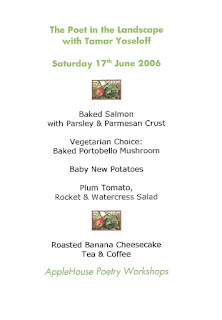 AppleHouse developed a reputation for good food and wine, sometimes themed to match the workshop that was running, a reputation for excellence and caring. Printed menus. Freshly brewed coffee. Fresh ingredients and home-made dishes. Free-range chicken and ocean caught fish. And, between August and October, even apples from our own orchard. Taste, colour, aroma and texture. These are the elements that mattered. The elements you might expect in a good poem, a poem that both feeds and satisfies you.
Baked Salmon with Chilli Kick Leeks
Colour and texture (and taste, of course, but that goes without saying) are what I love about this dish. And it’s so easy too. It’s a variation on the salmon from the menu on the left  for Tamar Yoseloff’s workshop. By the way, Hungry Writing Prompts follow the recipe so if you’re hungry to write, and not hungry to eat, scroll down.
Mix cream cheese with crushed garlic (one clove to 125gr of cheese) and spread over boneless salmon fillets. Make fresh breadcrumbs (the hardway is to grate an uncut loaf, the easy way is to chuck a slice or two of wholemeal in your blender and whiz a couple of times) with grated fresh parmesan and freshly chopped parsley, or if you don’t have any, you can use dried chives, and press lightly all over the cheese topping.
Bake for 20 to 25 minutes at 200°
While the fish is cooking, finely slice washed and dried leeks (not too much of the dark green bit) and sauté gently in a little oil and butter, adding 1 crushed dried piri-piri or bird’s eye chilli for every two leeks.
Serve the salmon on a bed of soft, buttery leeks. 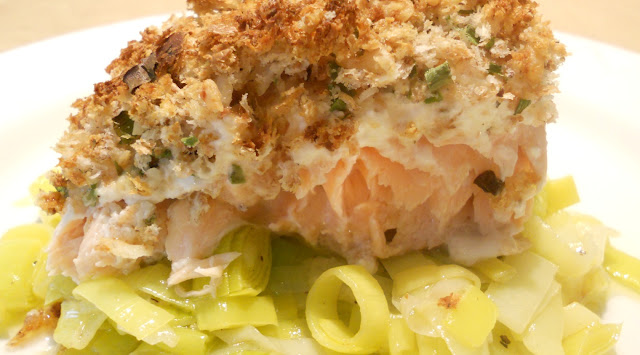 Hungry Writing Prompts
Write about being disappointed.
Write a recipe for something inedible, not necessarily food.
Write a list of all the things you’ve ever tasted.
Write about conflict.
Write about what satisfies you. ﻿
AppleHouse Poetry bad food Catherine Smith leeks salmon Tamar Yoseloff writing courses

Deborah said…
"Taste, colour, aroma and texture"... So true, Lynne. I always think that people who claim not to care about food are missing out terribly. And that salmon looks just wonderful - exactly my kind of food for taste as well as thought.

Really enjoyed reading about the course, too. I've never been to any creative writing class, and always wondered what went on.
13:50

I’m heading home to the melancholy voice of Natalie Merchant singing her version of Emily Dickinson’s poem ‘because I could not stop for death, it kindly stopped for me’ and I’m thinking to myself death is a bit, well, weird, to get your head around? In much the same way as “what is the other side of the end of the universe? I am reminded of Mr. Burns, not the one off the Simpsons, when he said ‘he looked at the obituaries every morning, and if his name wasn’t in it he’d get up’ only one day it was in it, so I guess that morning he had a lay in, also, Spiky M when he announced to the world via his tombstone ‘I told you I was ill’.

It got me mulling over a time when I was a child, I sat bolt upright during the night, in fright, in the sudden realisation that I was going to die – at some point anyhow – I am convinced I have not slept properly ever since, sleeping with one eye open perhaps. Shortly after this incident I wrote my first poem, about ‘odd socks’ which wasn’t very good, and I have worked very successfully to maintain this standard ever since. I do however get a little satisfaction every morning when I open my eyes, still here! So I cannot help feeling when John Lennon sang ‘life is what happens to you whilst your busy making plans’ hits the hammer on the head, or is nail?
13:54

Anonymous said…
Remind me never to go on any residential writing courses. Nothing makes me more depressed than bad food. I do love your salmon recipe: I must try it.

BTW, my online writers' group (www[dot]writersabroad[dot]com) is doing a 2nd anthology this year on the theme foreign flavours: fiction and non-fiction. The call for submissions isn't out yet, but let me know if you're interested and I'll make sure you get a copy. You have to either be or have been an expat.

Lynne Rees said…
Hi Vanessa - there are some courses where the food is wonderful... just make sure to check out the cooking arrangements before you go! And yes, I'd love to have the info on your call for submissions.
20:45

the good soup said…
What a heavenly school you ran. Why was there an end? I will come cook for your school if you run it again! If you'd like me to? I'd LOVE to. I've always wanted to cook for retreats, to prepare the stomach for the mind.
08:59