I don’t remember eating these chips with my older sister, Shân, on holiday in North Wales, though I have a faint memory, that my mother says is from the same holiday, of the walls in a square upstairs room of a B&B that the four of us shared for one night. My father remembers it was an old school house in Capel Curig. My mother remembers the woman who owned the house giving us buttered welshcakes. But all I remember is the walls. They had some kind of decoration or fixing, perhaps a frieze or a dado rail, or maybe there were paintings or framed prints hanging around the room, but something cemented those walls into my memory. And each time I pull that scene to the surface I see that the ceiling is high too, the perspective preserved from my four-year-old eyes.
I look at the photo again; my left hand is a blur, the Box Brownie capturing it in motion, and something stirs. Do I remember wanting to hold a chip for the photo, the novelty of eating them from a packet outside propelling me to strike a pose, or am I inventing the memory? We are four and seven; the expression on my sister’s face is so beautifully contented I yearn to remember the moment.
I do remember eating chips on the back seat of our car outside the chip shop in Llwynhendy at the end of a long Saturday of family visits around Llanelli in West Wales: on my father’s side Grampa Rees and Uncle Michael, my father’s younger brother who lived at home until he was 32, Uncle Ivor and Aunty Beryl, Uncle Tom and Aunty Marion, and on my mother’s, Granny and D’cu, Uncle Bryn and Aunty Nancy, her only sister.
The frequency of the visits and the amount of people we called on decreased with the years. In 1965 Uncle Michael married, to probably more than a few raised eyebrows, a divorcee with a nine-year-old daughter. And if that wasn’t enough her previous husband had been a Scottish footballer. Duw, duw! They moved to Pemberton Park and kept to themselves.
Grampa Rees died when I was 8.
‘Daddy’s an orphan now,’ I said to my sister that night as we were lying in our single beds on opposite sides of the room.
‘No, he’s not!’ Her abrupt and tearful response surprised me, as well as the logic. If your mam and dad were dead then that meant you were an orphan, didn’t it?
‘He’s got us!’ she said.
I didn’t know that counted.
But my parents must have become weary with the dutiful round of family visits too, visits that were sometimes greeted with what seemed like indifference, or an absence of any obvious delight. They’d left Llanelli in 1957 and moved into the house where they still live on Sandfields Estate, outside of Port Talbot, because of Dad’s job at the Steelworks there. So perhaps tied up with their sense of duty was the conscious, or unconscious, desire to stay connected to and preserve their own memories of the place they were born, grew up and were married in, the place they knew as home.
The past closes over so quickly.
Whatever my parents felt at the end of those long days, and despite the round trip of two hours, and sometimes more, that it took to drive the 22 miles there and back in the early 60s, despite the boredom we kids experienced in houses where we’d been warned in advance to sit still and not to touch anything, and not to ask for anything either, the chips in the car on the way home made it all worthwhile. They were ‘open, not wrapped’, fat-cut and salty, sprinkled with vinegar in a greaseproof paper packet held in a fold of white paper and a sheet or two of newspaper through which the heat still seeped and almost burned my hands.
Sometimes we had fishcakes too, or rissoles, although the dominant ingredient of both was potato rather than fish or meat, but that didn’t matter. I loved biting through the crisply fried breadcrumbs to the soft pillow of seasoned mash inside, blowing on hot chips and licking salt and vinegar from my fingers as the car windows slowly steamed up.
It was dark by the time we finished. Mam collected the rubbish and Dad started the engine, blowing the heater onto the windscreen and wiping away the condensation with a chamois. We left behind the chip shop lights and drove out of Llwynhendy, through Bynea, Loughor, down to Fforest Fach and Swansea, along the Jersey Marine, and over the Briton Ferry Bridge, past the petrol station where Dad once bought four gallons for £1. My head rests against the cold window. My eyes are half closed. Nearly home now, nearly home. 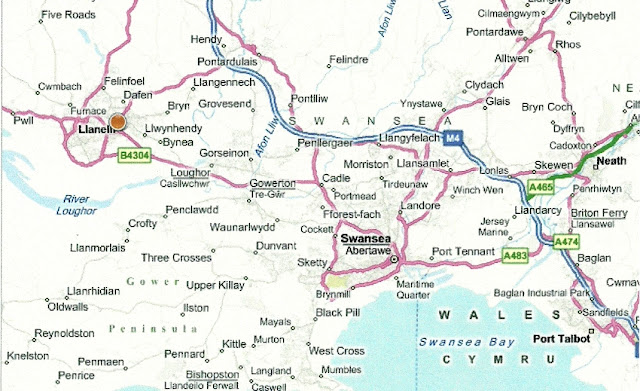 Unknown said…
First memory of eating...interesting. Mine is toast with too much butter. Melted and yummy.
04:49

Norman Darlington said…
Oh, Lynne, if I was never a fan before, I am now surely. (But of course I was!) Wonderfully evocative writing.
12:30

Tammy said…
A much later (but still completely evocative)food for me was the Egg McMuffin. Ah the pleasures of a North American childhood.
12:32

Anonymous said…
As a child I hated food and my mother despaired, so my memories are of things I didn't eat - rice pudding being one of my earliest rejections: my mum said she would give it to the dog. Things changed radically about 18 years on and I have been an incorrigible foodie ever since. I have always loved chocolate, though.
20:08

Martin Cordrey said…
So here’s the thing; why would two single thirty-something’s pre-kids both ‘be’ on the back seat of a car on a dark evening? Well, what you need to understand are two things; firstly I had visited my GP earlier that morning for a persistent yet not life threatening virus, and secondly I am allergic to Penicillin – which is written on my medical notes.

The initial problem was my normal Doctor was unavailable so I had a ‘fill in’ who I assumed was as competent as my usual guy, and that this temp’ had developed the skills of reading. I can only describe the effects of Penicillin poisoning as thus; if you imagine the sensation of filling your blood very slowly with liquid concrete, apart from the obvious effects it has on your breathing and brain functions, the pressure of veins expanding internally would, well, hurt.

Then try to feel what it would be like as it sets hard, your limbs becoming stiff, than stone solid, similar I guess to how ‘The Thing’ became in the Marvel comics. Now, none of this is conducive to romantic love, but, if there is one thing a women loves than that is to be a mothering martyr, and let’s face it men are pretty good when it comes to being wet nursed! So perhaps all’s well that ends well!
10:00

Lynne Rees said…
Thanks so much for adding your own memories, responses, and encouragement. I'm 6 months through the 'one post a week for a year' project I set myself and still enjoying every crumb : )
18:32

the good soup said…
Dearest Lynne, it's lovely to be back. I've been so caught up with writing and cooking (actually being paid too, ain't that a blast!) that i've neglected your site. I'm settling in for a good read now.

We ate that first loaf with mushroom soup, tearing off the balls of bread and exposing their poppy seed insides.

Lynne Rees said…
Angela! (@ the good soup) It's lovely to see you again too and read your story. You're going to have to make that bread for your mum : )
09:15