on February 16, 2011
They belonged to my maternal grandmother, Alice James, who was born in 1909 and lived until she was 93. A teapot and its standing plate, a sugar bowl and two jugs, one for milk, the other for cream. Or perhaps the larger one for hot water and the smaller for milk? 'Yes,' my mother says, who remembers them in her childhood home, 'that would make sense.'

My paternal grandmother, Catherine Rees, died in 1959 when I was 8 months old. I have no memory of her but I have the bakestone, or planc as we say in Welsh, she would have cooked her welshcakes on.

My mother emails to say that Aunty Beryl-next door has died. We always called her that, not to mix her up with our ‘real’ Aunty Beryl, my father’s sister-in-law, who lived in Llanelli.
Aunty Beryl-next door hasn’t lived there for a while now. A widow, she moved a few years ago into sheltered accommodation then later, after breaking her hip, into more permanent care. But she was there before I was born. I never knew life without Aunty Beryl-next door, and Uncle Dennis, and their daughter, Ann.
Ann was born six weeks after me. We grew up together. We had mud tea parties. I tied her to the Chrome Avenue street sign once and left her there.
﻿
﻿

One overcast afternoon, when Aunty Beryl was out, we painted our nails with Shocking Pink nail varnish that we found in her kitchen drawer and, when we couldn't find any nail varnish remover, we used a potato peeler to scrape off the brightly coloured evidence of our guilt along with the top layers of our nails. 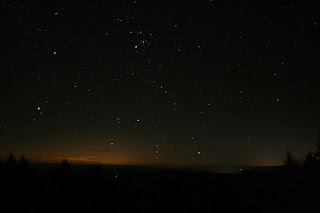 When we look at the night sky we are looking at the past, at light that has taken up to a thousand light years to reach us, from a star that might have already ceased to exist.

Teapots and bakestones. The memories we replay. They shine as brightly too.
Hungry Writing Prompts
grandparents memory stars writing prompt

Deborah Lawrenson said…
Lovely post, as ever, Lynne - and poignant too.
17:01

mely said…
I always enjoy your writings. This one made me go back to the 60's, too. Of my tea party on Christmas day with my neighbor's daughters. I remember that day with my brand new tea set.

Lynne Rees said…
Thank you, 'Mexico in my kitchen' - that's what I like memoir to do... to take the reader back into their own memories.
10:28

Unknown said…
I found your blog wondering about and it is beautiful! The story about the nail polish made my stomach ache. Great writing prompts!
17:54

the good soup said…
Oooh, the story about the nail polish reminded me of the close up skin scenes in Aronofsky's Black Swan. Have you seen it? uuuuuuhhhhhh...
07:23

Anonymous said…
I'm making a return visit to your great blog. What a poignant memoir and a lovely photo of you and friends in the Welsh hats. Ouch! I can just feel you scraping off that nail varnish.

Thank you also for the writing prompts - I'm an embryonic writer of fiction at an advanced age and need all the help I can get!
11:16

Lynne Rees said…
@ V Furnas - I'm delighted you wandered in : ) I post every Wednesday, so hope to see you again.

@ Angela - no I haven't seen Black Swan yet...I'm a bit behind with current movies, but off to to see The King's Speech tonight

@ everyone - d'you know I still feel my stomach contract when I think about that potato peeler session... I still have such a vivid physical memory of it! If I had to write a list of essential advice for girls then 'never use a potato peeler to take off your nail polish' would be at the top!
12:09