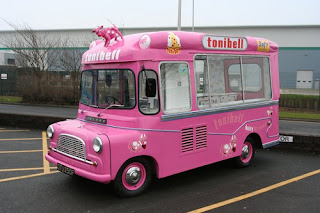 It is dusk. There are three of us, standing on the kerb in Chrome Avenue, looking up through the sliding window of the pink Tonibell van. One of us asks if he has any broken cornets to give away. We don’t have any money for ice cream. He might have said no, or he might have said, give me your hand and I’ll tell you. Which we will not do. Because we know him.
It doesn’t make sense for an ice-cream van to be doing its rounds at that time. Perhaps my memory has invented dusk for its dramatic effect, that uncertain place between the assurance of afternoon and evening, for the way our faces would have been illuminated by the van’s interior light. But perhaps he was there, at the end of his round, at the beginning of darkness.
Included in that memory are the details of all the other times he stopped in our street. He wore a pink nylon coat. His thin, black hair was smooth against his scalp. His face was plump and red and always seemed to be sweating.

When he hands down our 99s, a cone of soft, whipped ice-cream with a Cadbury’s Chocolate Flake, or we hold out our hands for any change, he presses his fingertips into our palms, lingering there even as we pull away. He leans forward, folding his arms on the edge of the window. He speaks quietly. ‘Come here, let me tell you something,’ he says when we're not buying and have no need to get closer.
And we do not tell our mothers. Because it’s not that we fear him exactly. After all, he’s not a stranger we should refuse sweets from. But we know something is wrong. What we don’t know is how to explain it. Or whose fault it is.
It wasn’t my fault
I remember saying that so often as a kid. But ‘fault’ is difficult to understand. If I tell my mother about the man we stumbled across in the sand dunes on Aberavon Beach, the one lying on his side with his knees pulled up to his chest, whose moans make us back silently down the grassy dune, then I might not be allowed to go and play there again. And whose fault will that be? His for being there? Or mine for telling?
Do what you’re told.
﻿﻿I was generally a good girl, out of fear more than anything else. And I still have a tendency to do what I’m told. Passage obligatoire pour pietons the sign reads just past the service station this morning, directing pedestrians to the other side of Boulevard Marechal Leclerc, away from the road-works. I cross over but then notice half a dozen other people ignoring the sign and barrelling ahead on the rough pavement. But it’s nicer this side of the road, next to the sea. A dozen or so gulls are bobbing on the surface of the water like those yellow plastic ducks you get at the fair. Sometimes doing what you’re told works to your advantage.
For years I never thought about making ice-cream because I didn’t have an ice-cream maker. I believed the people who told me that I’d never get rid of all the ice crystals no matter how much I whisked it before it set.
Sometimes, changing what we think, or how we think about it, can be down to one person saying something so obvious that we wonder why we never thought about it ourselves. David Lebovitz, author of The Sweet Life in Paris, said: People have been making ice-cream far longer than the invention of electricity.
His words combined with Michael Ruhlman’s suggestion, in The Elements of Cooking, for crème anglaise: Freeze it and it’s vanilla ice-cream convinced me, and so, cream, vanilla, sugar, egg yolks, a few brisk whisks and an overnighter in the freezer later, I had Vanilla ice-cream you would charge through road-works, barricades and any number of gendarmes to reach.
Hungry Writing Prompts
Home-made Vanilla Ice-cream

400ml of single cream
1 tsp of vanilla seeds (I buy these cute jars of gousses de vanille because I can't often find fresh vanilla pods around here)
75gr castor sugar
6 egg yolks
• First thing, set up an ice bath: one bowl (big enough to hold more than a litre) that can sit inside a bigger bowl containing lots of ice and cold water.
• Whisk half the sugar with the egg yolks until they’re thick and pale.
• Heat the cream with the remaining sugar until it’s hot but not boiling.
• Add a little of the hot liquid to the egg. Stir and add a little more. This is to ‘temper’ the eggs, or to get them used to a little heat before you mix it all together, otherwise you’ll end up with sweet scrambled eggs.
• Add the egg mixture to the hot cream and stir over a low heat until it thickens. You want a ‘blanket over the back of a wooden spoon’ effect, not thin like hot milk, not thick like hollandaise. (Thanks again, Michael Ruhlman.)
• Pour the custard into the bowl sitting in the ice bath and place them both in freezer to chill quickly.
• After 45 minutes, whisk briskly until it’s lovely and smooth, get rid of the ice bath and and return the ice-cream to the freezer.
• Repeat the 45 minutes/whisking pattern twice more, pour into a tightly sealable plastic container and re-freeze.
• Go to bed and dream of ice-cream for breakfast.

p.s. I really wanted to make Grand Marnier ice-cream and added 2 tbsp to the warm custard before putting it in the freezer. It tasted quite strong at that point but when it was frozen I couldn’t taste it at all. I’ve since learned that alcohol stops the mixture from freezing which is perhaps why I didn’t get any ice-crystals, but I like my alcohol to do a little more than that. So next time I’ll try doubling it for extra oomph.
﻿
children Chrome Avenue David Lebovitz Grand Marnier ice-cream Michael Ruhlman Tonibell writing prompt

Unknown said…
I've found a gem - your blog. I can answer one of your writing prompts: My mother was always telling me to look "right, then left, then right again, if all's clear - cross the road". Problem was I forgot all about that when I bought my 99 from the Tonibell icecream man (oh the jingle) and nearly got run over!
21:10

Lynne Rees said…
Hi Sue - thank you for the kind comment. I'm so pleased when my writing lights a spark to other people's memories. Yes, 'right, left, right again...' is so ingrained in my brain that when I cross the road here in France, in my fifties, I have to consciously reverse the instructions! Hope to see you at The Hungry Writer again.
10:22

the good soup said…
We used to make sorbet every day when I worked at Petersham Nurseries in London. If it froze in time for service, we'd call it sorbet, if it didn't, we'd scratch a fork through it and call it granita! Gorgeous icecream Lynne,
it's inspired me to try making strawberry icecream again.
03:19

I needed a short piece for my u3a creative writing class (I'm the tutor would you believe?)about children being uncomfortable around men without understanding why - but nothing explicit or obvious. I'd almost given up when I though hey, let's check out Lynne's blog and ..... you never let me down girl. Thanks.
18:48

Lynne Rees said…
Hey, Stephen - lovely to hear from you, and I'm really pleased this piece fitted the bill for your class. What I'm discovering with this autobiographical project is that sometimes I have to let the mystery/uncertainity exist...and articulate that as best I can.