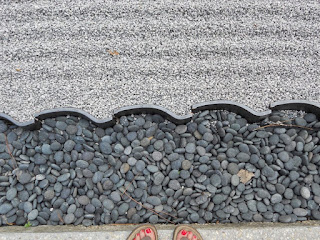 the shore of a stone sea 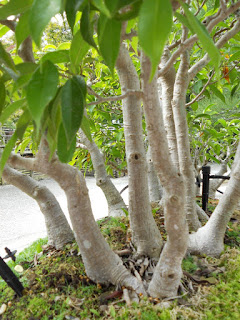 the heart of a bonsai grove
or these two old ladies like exotic finches in their turquoise and black pants suits, lips painted red, white hair coiffeured and lacquered: their tiny bones weighed down with two many bright feathers. They cling to each other as they totter on each step towards the Museum’s doors, then rest at the top to look behind them, at the lake with its reflections of sky and trees. If I clapped my hands suddenly, they might take flight, across the water, rising over the umbrella pines and bamboo grove, their wings stretching in the warm air as if they’d never feared falling, never doubted that earthbound was just a passing phase.
~~~
There is always more to know about myself. Like how I can feel simultaneously ecstatic and discomforted. Sitting alone in the Japanese restaurant, overlooking the lake at the Morikami Museum & Gardens in South Florida, there’s the joy of being exactly where I want to be and choosing whatever I want to eat and in whatever order I want to eat it. There’s no-one to express astonishment or disagree, or suggest something else. If I want to start with dessert I can. But every other table in the café is lively with chatter and chopsticks which seems to exaggerate the silence and emptiness at mine. I have left the museum guide open on the table next to my napkin, a notebook and a pen beside it, and while I’d like to put them away, to be uncluttered, I'd feel too exposed if I did. They fill some of the space around me, like laying down a blanket on the grass in a park, defining my boundaries, creating a small known world for me to occupy. 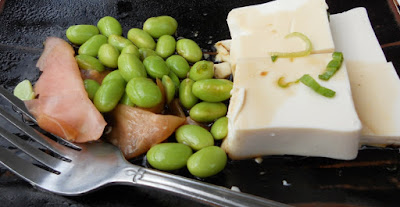 I’m in Japanese gastronomy heaven, swinging deliciously between silken and crunchy, sweet and sour, cool and spicy. I try a steamed edamame bean which looks so much like a sugar-snap pea… 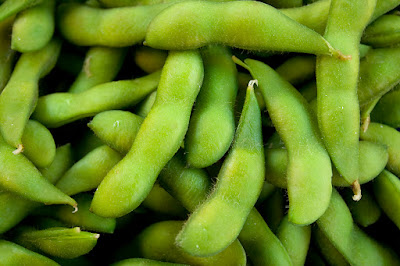 …that I pop the whole thing into my mouth and immediately wish there was someone sitting opposite me. Someone who will laugh with me while I choke and spit out a masticated lump of woody pod. Perhaps the waiter turning over the bowl's deep lid and leaving it on the table was a clue, but I’m still not absolutely sure of edamame protocol and I can’t see anyone else eating them to pick up some tips. Perhaps I was unlucky with a particularly woody pod, but they all seem equally tough between my fingers and bristly too, like the skin of a very coarse peach, so I decide to pop the pods and trickle the beans onto my plate.
While I didn’t laugh at loud I did smile and chuckle quietly to myself. Though it wasn’t so long ago when a similar gaffe would have had me squirming with embarrassment. Perhaps age has helped me take myself less seriously, made it easier to laugh at myself. Or perhaps I’ve made a complete fool of myself so many times now that I’ve begun to enjoy it.
During a workshop a few years ago I invited the group to contribute a verb, a noun, an emotion, a time, and an adjective for a 10 minute spontaneous writing exercise… dreaming, a house, regret, late afternoon and… fluffy. Fluffy? But spontaneous means running with whatever's suggested so we all began to write.
I like this kind of writing exercise, how it reveals the different worlds we all create with much the same material and so it’s great when students are happy to share their free-writing afterwards.
‘I’m afraid I haven’t used ‘house’,’ one student apologised before she read. ‘But I do have my character looking out of a bedroom window.’
‘That’s fine,’ I said. ‘You have an implied house.’ And, in a rather more enthusiastic manner than I intended, ‘I actually have an implied fluffy.’
Hungry Writing Prompts:
bang bang shrimp crab cakes Morikami Museum and Gardens tofu writing prompt

Deborah said…
This is a wonderful writer's post. The photos are spot on too!
19:04

Unknown said…
What a beautiful post :) I love Japanese cuisine and I adore edamame beans. I eat them by the bucketful.
21:04

Lynne Rees said…
Thank you, Deborah, Michael! Photos... sometimes I get lucky if I take enough : ) I'm only recently discovering Japanese food but I think I might be turning into a wasabi crack-head!
23:02

the good soup said…
Lynne, your blog is gorgeous! I'm so sorry I haven't comment until now. I'm actually reading a book at the moment called Sushi, from Samurai to Supermarket (or something like that- I can't tell you exactly because I'm trapped under a sleeping baby at the moment and am afraid to move in case we have to go back through the crying stage). Anyway, it's fascinating- highly recommend it, particularly as one novice Japanese Food Appreciator to another!
On another note, please visit my blog again, and if you feel the urge, try to comment again? I'm trying to resolve this comment issue and I'm thinking that if you follow this link, rather than go via food buzz, it might actually work? Would love to know if it is a Food Buzz (or other) related issue... Cheers, Angela
07:21

Lynne Rees said…
Hi Angela, and thanks! And yes... never wake a sleeping baby! Thanks for the heads up on the Sushi book...my latest is The Elements of Cooking by Michael Ruhlman... technical but absorbing. I followed his instructions to freeze creme anglaise to make ice-cream and it was impressive!