on December 22, 2010
It takes time for me to adapt to being alone to write.
The first few days are full of the novelty of only answering to myself, eating what, when and where I like, writing until the early hours of the morning if I want to, or staying in bed to read until midday. I like the kernel of stillness I feel growing inside me, not really talking to anyone, except in passing if I need to get some shopping, and noticing how my mind leafs through its ideas at a much slower pace.
It’s around the sixth day that the novelty starts to fade. The house or cottage feels too big or too empty. There are strange and unfriendly noises in the floors and heating pipes. I tend to be neurotically chatty with strangers, the post-man or the woman on the supermarket checkout, desperate to get away from the silence I’ve imposed upon myself. The stillness I previously welcomed feels hollow, like hunger. I’m agitated by the long days and nights. Aloneness becomes loneliness.
I’ve done a number of solitary writing retreats so I’m used to this emotional pattern and can usually push through those few days when I feel like packing up and going home. But a retreat at Almassera Vella at Relleu, near Alicante in Spain, in November 2004 nearly got the better of me. It took me much longer than usual to settle into my routine and I almost burst into tears when I walked into the village supermarket on one of these interim days:
How Are You?

my name and my heart
ignites with something that feels like heat, light.

No matter that rain is pushing its cold smoke
down the mountains,

that I can smell it coming,
the damp evening air sticking to my skin.

What more is there? My place in the world
confirmed, still hearing it in the street –

Lynne. Que tal? Like a blessing. And I am fine.
I am so fine.

(Prizewinner in the Poetry on the Lake festival at Lake Orta, Italy 2005)


But usually, by the eighth or ninth day, I settle. Hollowness and loneliness give way to stillness and aloneness again. I no longer feel threatened by the time that surrounds me. I stop measuring days and nights by the clock and respond to hunger and thirst instead, the need to rest, read or walk. And then

there’s the physical satisfaction, a joy even, when I complete a piece of writing that rings true on emotional and intellectual levels and which I know cannot be improved, at least for the time being.
I also appreciate now that there’s no guarantee a retreat will turn out as I expect it to, or even that I’ll produce the work I went there to write. I’ve learned to put aside projects that push me past an acceptable level of frustration and let myself discover what it is I need to write, even if at first that turns out to be pages of self-indulgent whining. That’s what happened at Almassera, until I finally started to feel at home in my small stone house in the dramatic yet enclosed mountainous landscape. I started writing poems instead of the draft of a novel I thought I’d be writing and I made sure to cook for myself each evening, forcing a deliberate shift away from the cerebral to the comforting physical acts of chopping, simmering and tasting, with a glass of Rioja close at hand.
Magret de Canard
The reason why this dish is one of my ‘alone’ foods is that Tony isn’t a fan of duck: it’s never tender enough and it never has enough flavour for him. ‘It smells like fillet steak when it’s cooking,’ he says and with that in mind he’s inevitably disappointed when he tastes it. So, if you like steak and don’t like duck this recipe isn’t for you!
But I also must admit to failing with it more often than I’ve succeeded, and sometimes that’s just been down to the quality of the duck. But I’ve recently discovered that I’ve been making two major mistakes, 1) pouring off the rendered fat before cooking the flesh side of the breast, and 2) not letting it rest before slicing it.
﻿
﻿I’ve tried all kinds of seasoning, as the photo on the right shows, and also something I buy at Intermarche in Antibes called Poivre Saveur which comes in its own grinder and contains black and green pepper corns, whole coriander and cardamom seeds. No one is better than the other; it depends what flavours you prefer, but if your chosen spice mix doesn’t contain salt, you will need to add some.
Trim any excess fat from around the edges of the breast then score the fat side into diamonds with a sharp knife, taking care not to cut through into the flesh. Turn it over and season the flesh well with your chosen spice. I like to sprinkle the spice on a wooden board and rub the flesh around in it until it’s completely covered. But you should season to the level you think you can take.
Preheat a frying pan so the duck will sizzle when you put it in fat side down. Cook for about 5 minutes over a medium heat, until most of the fat has rendered off and what remains on the breast is looking crispy. Turn, and cook for another 5 minutes. Depending on how chubby the duck breast is this will result in a medium cuisson – cook for less or longer if you prefer rare or well done. 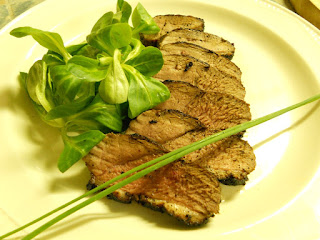 Remove from the frying pan and let it rest for 3 to 4 minutes until the juices start to run. Slice thinly then pour over any spicy meat juice that has run out.
One duck breast is actually enough for two if you have rice or potatoes and vegetables with it, but for me the whole breast is the perfect amount for one served with a salad of mâche (lamb’s lettuce) or rocket and a glass of red wine. If I’m particularly hungry, as I usually am, I follow it with a little more salad and some good cheese and another glass of red. This is ‘alone’ food: I can do what I want. So can you.
Scary Spice Tomatoes 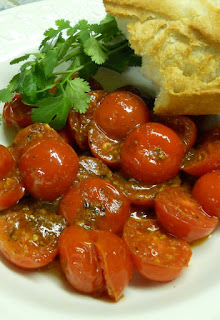 After failing to get all of the carefully arranged spices (see photo above) back into their relevant jars – the spices that you shaped so patiently with two credit cards as if you were cutting lines of cocaine – mix up what’s left on the plate.
Heat a couple of tablespoons of olive oil in a saucepan and throw in the halved cherry tomatoes that are almost past their best and you were wondering what to do with.
Add the spices, stir briskly, and let everything sizzle for a couple of minutes. Hope for the best, which doesn’t turn out so bad after all. Be proud.
Eat standing up at the kitchen counter dripping spicy tomato juice everywhere and mopping it up with bread. Be very pleased you are alone.

Brigita said…
These pieces are so delectable. I only read this one and the previous one on Jersey, but I'm looking forward to reading more during the Christmas holidays. :-)
11:38