on December 08, 2010
The last thing my Dad says to me before I leave for the station is, ‘The house comes alive when you’re home.’ And then I’m in the car, driving away in the rain, watching my parents waving from the porch window.
I cannot think of my dad without thinking of his garden which he has brought to life every year for nearly 50 years with potatoes, beans, carrots, beetroot, onions, cabbage. I see him digging, planting, thinning out, and later bending over a row of plump onions, twisting down their tops to allow the bulbs to dry. The coalbunker in the garden was demolished over 40 years ago but when I picture it I smell onions, strung into plaits and hung in the cool dark amongst his forks, and hoes and spades.
As a child I pushed between the long rows of beans with a colander and instructions: leave the small and don’t miss the big. The coarse underside of the leaves grazed my bare shoulders; sun dribbled through the overlaps. I could smell hot, uncooked bean. Later, in the kitchen, he topped and tailed them, sliced away their woody spines. ‘Just a plate of these’ll do me,’ he used to say, ‘with some butter and a drop of pepper.’
﻿
Snow along the tracks as the train passes through Bridgend, Cardiff, Newport. I remember the winter of 1962/63, the winter Sylvia Plath died in London, the one people still talk about along with 1947, and now, perhaps, 2010 with its airport closures and blocked motorways. I remember staring out of the front-room window at the snow lying thickly along Chrome Avenue, hiding all the pavements and gardens, and continuing to fall, in big, slow flakes. I am 4 years old, wearing a white tartan skirt, standing on the sofa, my fingertips pressing into the claret-coloured Rexine. But if this is a true memory why do I see myself from behind? Why don’t I see only the street, the view through the window? How much of my past is invented, a patchwork of memory and imagination?
Tony asked me to marry him on a flight from Heathrow to Miami. He stood up in front of our bulkhead seats and said, ‘Blods, will you dance with me?’ There’s not a lot of room in a bulkhead so it was more swaying back and forth on the same spot than dancing. And then he asked. And I said yes.
We didn’t want to get married. In fact, ever since we first spoke about it, I couldn’t stop thinking about stories of people who’d lived quite happily together for twenty years, as we had, before suddenly deciding to get married, and then split up within a year. But we needed to get married to buy the house in Antibes. French inheritance laws are complex and unavoidable and inheritance taxation between ‘unrelated’ people is cripplingly high. So we really did get married for the money!
And because it was a purely administrative choice for us we didn’t want to mark the day in any way. We didn’t want to suggest to anyone, and particularly to ourselves, that things would be different from now on. So getting married in Florida while we were there on holiday, with no friends or family present, and with no excuses or explanations to make to anyone, seemed the easiest and most ‘un-remarkable’ thing to do.
But you have photographs? people ask. No, sorry. We didn’t do that either. But we did laugh in Deerfield Beach Town Hall with a Public Notary who looked like Whoopi Goldberg and who repeated, ‘You guys!’ each time she asked about friends, witnesses, cameras, flowers etc. After 30 minutes and a bill for $135 we went back to the little bungalow we'd rented on Hillsboro Beach, had pancakes for brunch and then went for a swim.
That was three years ago. Now here he is, waiting for me on the other side of the Plexi-glass security screen when I come through Passport Control at Nice. He jumps up and down and waves with both hands, mouthing hellooooo, oblivious to people standing around him. If he asked me to dance now, even with the screen between us, I’d say yes.
Haricots Verts with Garlic Butter Glaze
The beans I remember picking in my dad’s garden were runner beans, the ones with the red bean hearts inside the green pod, or at least they were red until you cooked them and then they lost their colour. He grew dwarf beans too but they weren’t as dramatic as the runners. They (obviously, by virtue of their name) didn’t grow as tall. I couldn’t lose myself in a tunnel of scratchy leaves and sunlight. Picking them was more chore than adventure. So this recipe is my apology to dwarf beans, or Haricots Verts: you have my complete attention now.
Snip the tops off the beans, and the curly tails too if you don’t like them. Apparently the French don’t. Steam, or drop them into lightly salted boiling water and simmer, until cooked but still have a bite to them. You don’t want mushy beans. 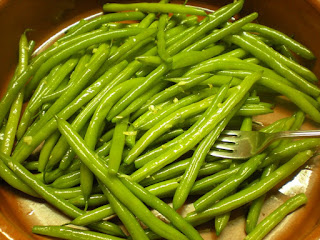 Melt a knob of butter and a tablespoon of olive oil in a deep pan and add some finely chopped garlic. Swish it around over a medium to low heat for about a minute until it’s cooked. You don’t want burnt garlic. Switch off if the beans aren’t ready.
Drain the beans and toss them in the hot garlic mix over a medium to low heat until they are glistening and steamy.
Serve them with anything. Or eat them on their own. Or add finely sliced salami or chorizo and top with shavings of parmesan for something fatter and more filling.
Apple Pancakes with Cinnamon Honey Cream Cheese
Actually the apples are optional because they sound better than they end up tasting. Or maybe I haven’t found the right apple here in France. I’d imagine that a fresh Cox, or something crisply similar, would be the best because anything that’s too sweet or too juicy is indiscernible in the final pancake. I’ve tried Braeburn, Gala, Jazz, Pink Lady, Fuji, and some anonymous red and green ones that were just labelled ‘French’ and only occasionally detected a burst of appleyness. But I still use them because if you flip them over quickly when the batter is still a bit wet on top the bits of apple splash towards the outer edges and create a crisp fringe. Now, if I haven’t put you off, this is how I make them.
1 small cup of flour
1 small cup of milk
1 medium egg
Mix together, add a pinch of salt, and 1 small grated apple, peel and flesh.
(I’m sure you realise that if you decide to use a large cup then you follow that pattern.)
Melt a knob of butter in a large frying pan and when it starts to sizzle add enough batter to make one big pancake, or two or three individual dollops to make two or three smaller ones. 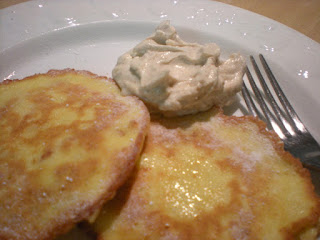 Wait until the tops of the pancakes start to develop little holes as that means they should be cooked and golden underneath. Flip over for another minute or so.
Now, about the cream cheese. You can use Light, or Low Fat, but it doesn’t taste the same. I’d rather use the Full Fat and have big taste, small portion. Who am I kidding? Big taste, big portion. Add runny honey and ground cinnamon to taste; mix well and serve on the side of the pancakes.
Sprinkle with icing sugar if you’re allowed.
Hungry Writing Prompts
apple pancakes beans cinnamon honey cream cheese father Florida garden haricots verts imagination marriage memory Nice snow vegetables Wales winter