Tony’s mother died unexpectedly in April 1998. She shouldn’t have. She was fit and healthy. She told us she didn’t want to ‘bother anyone’ when she started having breathing difficulties after she somehow ruptured her oesophagus. Within two weeks the infection in her lung developed into toxaemia and she died.
Two years earlier she had a hip replacement and stayed with us for a month to recuperate. During that time she went from sleeping upright in an armchair the week she came out of hospital to riding a bike for the first time in 60 years a few days before she went home.
Tony used to set her fitness goals, hiding lottery scratch cards in the hedge a little further along the lane each day. I tried to increase the appetite she’d lost through so much pain prior to the operation, making the small and soft food I knew she liked: crust-less sandwiches, cod in parsley sauce. She used to say ‘thank you’ to me a dozen times a day.
Lilian Lavinia Crosse was born in 1920 and married in 1938. She had two sons before the end of the war then, 20 years later, when she was in her late 40s, a rather unexpected daughter. Tony remembers his dad, Jack, calling him at work in a wild panic.
‘Son, it’s your mother, your mother…’
‘What Dad, what is it?’
‘She’s pregnant, son, and it can’t be mine. I’ve only touched your mother once this year.’
‘That’ll do it, Dad,’ Tony said.
I’d only known Tony a year when Jack died in 1986.
‘When was your brother born?’ I asked. We were getting all the official documentation together, birth certificate, marriage certificate, to take to the Registrar.
‘Um… February 1939.’
‘Your parents were only married in November 1938.’
‘The sneaky bugger!’ Tony started to laugh. ‘And he gave me and Baz such a hard time when we had to get married!’
I was amazed he hadn’t worked it out before. His sister had. I had. I guess girls are like that.

Jack’s funeral was a standard crematorium service. Tony chose two pieces of music but apart from that we went along with everything the funeral director suggested. When Lil died twelve years later we wondered if we could do things differently. A copy of The Dead Good Funerals Book told us we could.
We ordered a ready assembled cardboard coffin from Compakta Ltd and Tony painted Lil’s portrait at one end and a portrait of his dad at the other. On the sides he painted poppies and butterflies. The lovely, family funeral directors in West Malling, Viners & Sons, collected it from our house the day before the funeral, went to the hospital to pick up Lil’s body and then drove directly to the crematorium.

Lil wasn’t religious so we asked for all religious artefacts to be removed from the crematorium chapel and declined the services of the chapel overseer in his priest-like robes. There was no organ, no dramatic journey of the coffin through a curtain. The only floral tributes we had were two arrangements of white lilies. Tony asked people, if they really wanted to contribute in some way, to send him a memory of Lilian, an anecdote or a photograph, something personal that reminded them of her.
I suppose we shouldn’t have been surprised that people took offence, among them her older sister, a Catholic nun, who refused to attend. And I do understand that funerals should also be about comforting the living, but I am still glad we said goodbye to Lil in an informal and intimate way, a way she would have liked, and not have been frightened or intimidated by. I remember standing beside her after Jack’s funeral, while everyone sombrely read the floral tributes and one of Jack’s sisters wailed and threw herself across the bonnet of a car, and she clutched my arm and said, ‘Lynne, get me out of here.’
So we sat with her for a while, read poems, swapped stories and laughed and cried. We took photographs of the tributes from her grandchildren and Tony played the guitar and sang for her on the same date, 1st May, she’d given birth to him 54 years earlier.
Later, back at our house, we ate poached salmon and drank sweet sparkling wine because that’s what Lil would have enjoyed. And we had a birthday cake for Tony who looked as if all the light had been wiped from his eyes, perhaps how all sons and daughters feel when the source that brought them into the world is extinguished. ﻿
﻿
What I remember most about her was her childlike perception of the world, how I never heard her say an unkind thing, and the incredible ease with which she laughed,  with you and even more so at herself.

Towards the end of the month she stayed with us we went to a neighbour’s house for an early evening drink in their garden of classically laid out lawns and flower-beds.
‘What I really like about your garden,’ Tony said in conversation, ‘is the symmetry.’
‘Oh,’ Lil said, ‘have you got dead people buried here then?’
Salmon Risotto
Lil was terrified of bones in fish. If we ordered fish and chips she always asked for ‘Rock Salmon’ something I’d never heard of until I went to live in Kent, but which I think is huss or dogfish. The flesh is white and bone free, rather like monkfish, I imagine. But even so she still nibbled through every mouthful, testing carefully between her tongue and false teeth for possible bones.
Although we had salmon at her funeral party I never had the chance to make this risotto for her. But I think she would have liked the soft rice and sweet, boneless fish. And this is comfort food: it’s a gentle, deliciously easy one pan/one dish meal that satisfies your hunger but doesn’t overfill you. You can eat it from a bowl while you’re tucked up alone on the sofa, and keep the second bowl for the next day, or you can share it with someone who comforts you.
For 2:

• ½ medium onion, finely sliced
• 600 - 650 ml good quality vegetable stock. (It’s difficult to be exact as the final amount you'll need depends on your rice and the cooking temperature. But you can always add a little more water, or hold back on using all the stock.)
• 200 gr good quality risotto rice
• 200 gr piece of skinless, boneless salmon fillet
• 100 gr of baby spinach
• salt and pepper
Gently fry the onion in a little olive oil in a deep frying pan until it’s soft and transparent.
Add the risotto rice to the pan, stir to coat and add half the stock. Keep over a low heat and stir regularly.
In the meantime, cook the salmon. Sometimes I do this in a hot oven, for about 16 minutes, to get some crispy bits on it, but you can just as easily cook it in the microwave for 2 minutes with the same splash of white wine and lemon juice and a sprinkling of dried dill. Once cooked, flake the flesh with a couple of forks and keep to one side.
Add half of the remaining stock to the risotto and taste for texture. I don’t like firm rice but you might, so I usually end up cooking it for about a total of 40 minutes.
(Little aside: I was once at a posh restaurant in Fowey, Cornwall, and ordered the chef’s ‘deconstructed’ rice pudding for desert and some of the rice grains were not just firm, they were cracking between my teeth when I bit into them. ‘That’s the way Chef prepares his pudding,’ the waiter told me when I said it wasn’t cooked enough. Bugger that. Some things shouldn’t be messed with.) 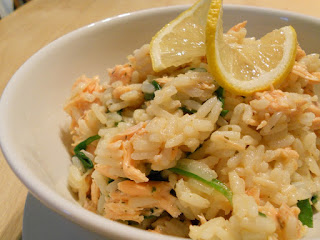 Add as much of the remaining stock as you need, or a little more, until the risotto is firm but slightly sticky.
Add the spinach and the flaked salmon. Don’t be alarmed at the quantity of spinach in the pan as it wilts very quickly. Cover with a lid, switch off the heat and leave for about 3 minutes.
Mix through gently, season if you need to too, and leave covered for another minute or so if you want a wiltier spinach.
Freshly grated parmesan is lovely but optional, as is a tomato and basil salad on the side. I like a twist of lemon too.
at December 29, 2010

I was looking for a Salmon Risotto recipe and I came across your page. What a wonderful read and I shall be cooking the risotto tonight.

I have book marked your page and the coffin link, I'm hoping I won't need the latter for a while as I'm 36. I'm delighted to have found an environmentally friendly alternative and I shall be updating my will.

It was beautiful to read such a lovely family story along with your recipe. I'm now going to make a pot of tea, put my feet up and read your other pages.
Thank you.
Victoria.

Hello, Victoria. Lovely to meet you here and thanks so much for commenting. I hope your risotto works out well. Hope to see you again on the hungry writer.

Hello, I came across this in the same way as the writer above and also felt I had to comment. I was only looking for a recipe but couldn't stop reading, it was so moving, beautiful, and yet also informative and amusing. Thank you.

Thanks so much for taking the time to let me know. I really appreciate it.