﻿
﻿ There’s a supermarket opposite, a bodega on the corner that will fill your empty bottles with the local vino negro, a wine darker and heavier than rojo, and a little further up the road, one of Barcelona’s covered markets for fresh fruit and vegetables, chicken, meat and fish, and a stand-up coffee bar where you can grab a café con leche or café cortado and throw your crumpled sugar packets on the floor.

The first time I buy a chicken there I come home with its sawn off feet in a little bag. The Catalans roast and eat them, perhaps a parallel to how the British roast and eat pork crackling, though a chicken’s claws strike me as a rather more challenging culinary experience. After that I always make a point of saying, No quiero las patas. No feet.

I nearly give up on the market after my third visit. Okay, my castellano (standard Spanish) is limited, my Catalan non-existent, but surely that doesn’t merit the loud, rapid-fire rebukes I get at nearly every stall? I tell Leonardo, our doorman, and he explains what I’m doing wrong. Or what I’m not doing.

The British shopping habit of silently clocking who’s there before you and who comes up after you, so you know when it’s your turn, doesn’t work here. If there are more than two women in front of you, you must ask, Quien es la ultima? Who’s the last one? And someone will reply, Soy la ultima, and then everyone knows the pecking order. Of course, you need to listen for the same question, and for the first couple of months of market shopping I’m so anxious that I won’t hear or understand the next person, or they won’t understand me, I spend most of the time holding my breath. I know what I mean when I say breathing techniques should be a fundamental part of language classes.

It’s Leonardo who gives me my first Spanish recipe. I want to cook something traditional, I say to him one evening, and the next day he hands me a scribbled list from his wife for Merluza en Salsa: lightly fried hake in a sauce made from onions, garlic, red pepper, tomate triturado (passata), white wine, saffron and cooked peas.

I set off to the market, deliver my now practiced, Quien es la ultima? at the fish stall and a tiny, old woman turns to me and says, Servidora. I hold my breath and hope no-one else comes along after me. Leonardo? Ah, si! He’d forgotten. That’s what some of the older people still say. It translates as ‘your faithful servant’ or ‘yours truly’; basically, ‘me’. Breathe. 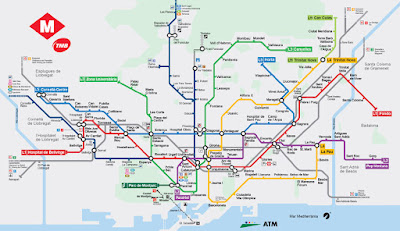 After Tony took the metro each morning, from Joanic in Gracia to Jaume 1 in the Barrio Gotico where Winchester School of Art had studios for their MA in European Fine Art, I shopped, cooked, read my Spanish grammar books and studied for the first year of my distance learning MA in Writing with the University of Glamorgan.
﻿
﻿I stopped reading novels, immersed myself in the previous 100 years of British and American poetry, did enormous amounts of free-writing and attempted to write and craft my own poems that I posted off in fat packets (this was the mid 1990s, the days before email) to Gillian Clarke, my tutor at Glamorgan.

For the most part I wrote terrible poems: the worst kind of feminist poems about menstruation and vengeful, bare-footed women, poems that were all imagery and no substance and full of unconscious habits of phrasing and odd punctuation which must have driven Gillian to distraction, despite evidence of her measured advice: ‘Is this something that could be more subtly put?’, and encouragement, ‘Good ending!’

There were glimpses of craft, of pushing boundaries and experimentation: the form of a free-verse poem emerging in response to its subject matter, some strong poetic closures, a few prose poems at a time when the form was far less common than it is now. But it would be another ten years before I published my first collection.

During one of our tutorials, Gillian said, ‘Don’t be in too much of a rush to publish your first book.’ That’s easy for you to say, I thought, when you already have dozens of books to your name. But I understand now what she was trying to tell me and I'm pleased I continued to serve that apprenticeship after finishing the MA in 1996 – attending workshops, writing courses and readings, submitting to magazines – as challenging and unrewarding as it seemed at times – and that I didn’t self publish too early or find an undiscerning publisher. Learning How to Fall has its failings but I am still proud, five years later, of the overall level of craft the poems display.

There is a series of Barcelona poems at the back of the MA manuscript. Not one of them made it through to the collection because they’re not really poems, more postcards to myself. ‘I have never lived like this before,’ is the opening line and the following pages are full of vivid descriptions that transport me back to a year when I seemed to learn most of my Spanish from the backs of tins and packets, from recipes in the monthly issues of Cocina, and conversations with Leonardo in the foyer of our apartment building. At night we could see the lit spires of the Sagrada Família from our apartment on the 7th floor. We watched our neighbours dead-heading flowers on their balconies, listened to the clink and chatter of their late suppers. And here is a dish of patatas bravas at the Cafè de L‘Òpera on La Rambla, tapas and cava at La Xampanyeria on Reina Cristina. And, to finish, a thick slice of Brazo de Gitano, a sponge roll packed with rich yellow crema and named for the arm of a gypsy I’ve never met the likes of in my life.
Merluza en Salsa
(Hake in a Sauce) 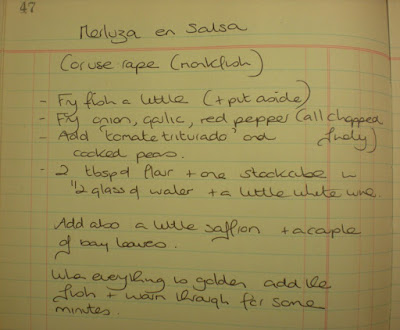