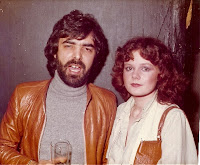 I learnt the secret of a good Bolognese sauce from a man who looked like George Best.
It was 1979. I met him at the bar of Lord’s Discotheque in St. Helier, Jersey. He said his name was Joe, that he drove tourist coaches for a living and he came from Argentina.
I don’t know if he was a particularly good liar, or perhaps a particularly good impersonator – he even went to the trouble of carrying a coach driver’s license tag on his key-ring – but I was twenty-one and particularly naïve. I believed that his jealousy, sullen moods and tendency to show up at my place at all times of the day and night were proof that he loved me.

This was my first Bolognese, courtesy of Robert Carrier, whose precise instructions I followed to the letter, slice and ounce for hours on Sunday morning. Joe was due at my flat at one o’clock. He turned up two hours later in full defensive bluster, blaming a football game he’d forgotten about, trying to make me laugh about the whole thing, and, when that failed, resorting to loud threats of leaving. He didn’t have to stay and put up with this kind of shit. He’d had a tough enough week at work without his girlfriend giving him a hard time at the weekend. He was going to walk out and not come back. Go on then, I say from 30 years away, walk out and keep on walking, you arrogant prick.
And I want to shake her, that girl who starts crying. ‘Don’t go. I’m sorry. Please stay,’ she says because she’s frightened, because she feels she’s in the wrong, because she can’t see she has a choice.
I can come up with any number of reasons for my reaction, then and on later occasions. I didn’t have any strong, independent, female role models. I had no self-belief. I used to mistake a man shouting for authority. I can cite my family background; the era in South Wales where I grew up; the bank where I worked that had different ideas about work, approval and promotion for men and for women. They all sound self-pitying.
How long did I carry on seeing him? Six months, nine months? Until after I found out he was married and ran a hotel with his wife above St Aubin’s Bay. Until after he was taken into police custody one Friday night, accused of stealing drums of coffee and fillet steaks from the Cash & Carry, and coerced me into being his alibi. Until after his wife phoned me at work one day and said, ‘You think you’re special? You’re just one in a long line of girls. He always comes back to me, you’ll see.’
She was right.
Joe wasn’t Argentinean either. He was Portuguese. It seems like a strange thing to lie about today but at that time in Jersey the local people, and a lot of my colleagues in the banking world, looked down on the island’s Portuguese population who were there mostly as low-wage workers in the hotel and restaurant industries. ‘Pork-and-cheese’ and ‘spic’ were used casually and without conscience to describe anyone with olive skin, or with a Hispanic or Latino sounding name. Joe Santos. Originally the Portuguese and Spanish for ‘saints’.
The irony makes me smile and wince at the same time. His behaviour. How his wife put up with him. My own self-absorption.
He said the Bolognese was great, he could tell I’d gone to a lot of trouble, but there was no way it would have been ready two hours earlier. No way.
Some things take time.
Slow-cooked Bolognese 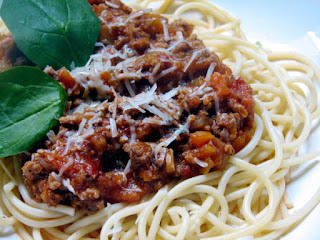 I haven’t specified quantities. Decide how much meat you need for the amount of people you’re cooking for and that will guide how much of everything else you add. Once the meat is cooked (after about 15/20 minutes) you can taste, add more bit and pieces, and season to your taste buds’ content. You really can’t go wrong.
In a little olive oil soften chopped onions and thinly sliced celery.
Add good quality minced beef and keep turning it until lightly coloured.
Add:
Add a little more water, or stock, if the sauce is too dry, cover the pan and let it cook very slowly for at least an hour, and up to two, stirring occasionally and checking the consistency, until it starts to ‘shine’.
To increase the ‘shine’, stir in a large knob of butter.
To intensify the beefy flavour, add more marmite, but sparingly.
Scatter a handful of fresh basil leaves and fresh shaved parmesan over the sauce just before serving to people who love you, and who, for the most part, don’t lie to you or make you cry.
Hungry Writing Prompts
bolognese Jersey robert carrier