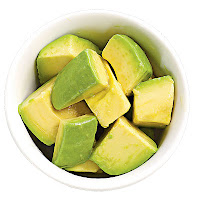 There were no avocados when I was growing up in South Wales in the early 1960s. The most exotic thing I remember was Vesta Beef Curry and Rice, reserved for my dad when he was working shifts. And Ski yoghurt. My mother bought one pot in the Co-op so we could all try it.
'It tastes like junket,' she said.
I didn't know what junket was but it sounded like it would come in a shiny aluminium bucket.

I didn’t like eating until I was around eight. Or, more accurately, I didn’t like eating dinners: breaded plaice with chips, peas and bread and butter, or roast beef, roast potatoes, carrots, cabbage and gravy. Food spread out and nudging the rim of my plate. I can’t remember having a reason for not wanting to eat what my mother put in front of me when I came home from school at midday. And I can’t articulate one now. What I can remember is a feeling of overwhelming helplessness in the face of such a mountain of food.

It often reached the point when I was still staring at my plate an hour later, knife and fork unsullied, gravy congealing over the vegetables, with my friend, Kathryn Monks, walking up the garden path. That was when panic set in. The thought of being late for school threw me into floods of tears.

‘You’ll eat it, warmed up, when you get home,’ my mother would warn me. And sometimes she carried out the threat and we’d go through a whole 90 minutes of resistance (me) and despair (her) before I was sent to bed.

My mother says I was melodramatic. She’s probably right.

45 years later I found myself on the other side of the plate facing the same kind of resistance from Summer. Meal-times were marathon sessions of cajoling and distraction techniques. Karma. Everything comes home in the end.

And so I invented The Oesophagus Game: the food goes into your mouth, chew chew, you swallow, glug glug, down into your oesophagus, squeeze squeeze, into your belly, mash mash, into your intestines … and her lunch or dinner would slowly disappear. Most of the time.


Watermelon and Feta Cheese Bits & Pieces
Cut watermelon and feta cheese into small cubes in a shallow dish. Provide cocktail sticks for harpooning the pink and white fish together.

Watermelon and Feta Cheese Parcels
Take two long, fine slices of Parma ham, or similar, and lay them across each other at right angles. Place a square of  feta cheese in the centre, then a square of watermelon on top. Season with salt and black pepper. Lift up the slices of Parma ham to wrap over the top of the stack and secure with a cocktail stick and a fresh mint leaf or basil leaf. Decorate the plates with curlicues of balsamic syrup and a few toasted pine nuts or pumpkin seeds.